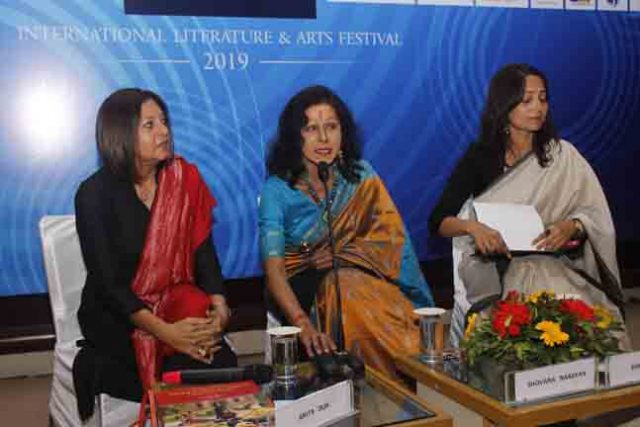 DEHRADUN, 15 Nov: Leading Kathak exponent, former bureaucrat, a recipient of the Padma Shri and Sangeet Natak Academy Award, Shovana Narayan said today that dance was Yoga and Yoga was dance in a way. Dance and yoga were completely in tune with each other. She was in conversation with Shalini Rao at a talk session in respect of the book, titled, “Illuminating Indian Classical Dances through Yoga” that has been co-authored by her with Yoga expert Anita Dua. Narayan said that people generally thought dance and yoga were two different things, but she believed that Nritya (dance) is yoga and that, from a dancer’s perspective, it could be stated that dance and yoga were in tune with each other. Narayan added that, both, Yoga and classical dance required lot of discipline and hard work. Yoga meant binding and union of the body, mind and spirit. Yoga was not just a form of physical exercise and the asanas were just one of the eight limbs of Yoga according to sage Patanjali. Union of Atma (soul) with Jivatma (God) was the ultimate objective, which would be achieved through asanas, Dharana (concentration), Dhyana (meditation) and Samadhi (enlightenment). Like yoga and for dance as well, dharana, dhyana and Samadhi were the path and the destination. Narayan added that while the Asanas were the most visible part of Yoga since it involved physical movements, Yama (self restriction) and Niyam (rules and discipline) were as essential to attain excellence and the desired goals. Just as Dhyana was a state of meditativeness in Yoga, a similar state of being was achieved in dance when the dancer became one with the dance. There were a lot of similarities in both the disciplines, she added. Emptying one’s mind of other thoughts, one learnt focus. For example, when a Kathak dancer was doing the Tatkaar (feet movement), the feet kept moving physically but mentally the dancer would reach a state of ecstasy and that was the state of Dhyana for a dancer. The ultimate state of Samadhi in a dance was achieved when the dancer became one with the dance. Narayan recalled that though she had written other books, she was pushed to write this one by the publisher and that was when she came in touch with the co- author, Anita Dua, a Yoga teacher and a disciple of leading Yoga master BKS Iyengar. She said that Narayan had already written a significant portion of the book when she was contacted by Narayan and it was during the process of writing that she realised the similarities between classical Indian dance and yoga. She also stated that it was a coffee table book. Dua claimed that, both, dance and yoga laid emphasis on the oneness of body and mind. She added that Asanas which had grown popular across the world were important because they ensured physical fitness and therefore contributed towards peace of mind. Once this was achieved, one could transcend to another level, both, in Yoga and dance. Shovana added that Yoga was basically the harmony of mind, body and soul. In dance, the dancers performed the asanas in a dynamic motion, while in Yoga, going from one asana to another involved stillness. In dance, too, as with Pranayam in yoga, one needed to have control over one’s breath. The co-authors disclosed that the book was available on Amazon and a digital Kindle edition was also available on Amazon.

Garhwal Post has established itself as a credible, balanced and forward looking newspaper in India. Based in Uttarakhand, the daily is read by the aware, socially and culturally responsible, high-income elite of society.
Contact us: info@garhwalpost.in
https://garhwalpost.in/bwwm-relationships-blogs/ https://garhwalpost.in/dating-websites-free-for-women/