Till the halcyon days of my adolescence, I hadn’t seen death as such, not even a dead body. That day, when I first saw the twin bodies of siblings who had drowned in Bhimtal Lake, is etched indelibly in my mind and the lamentation of their father, an army officer, still haunts me. I have spoken at length about it in one of my stories. It was after this tragic incident that I tried to read Bhagvat Gita for the first time in my life.

In 1974, I saw my granny dying at the ripe age of eighty-five. I just could not muster the courage to join her funeral procession. The very thought of a human body, so near and dear, getting consumed in roaring flames would scare me. Following it, the death that shook me to the core was of Diddi (my mother) in 2013. I am indebted to my daughter who then brought for me the books of Brian Weiss. But for these books I probably would have gone deep into despondency and depression. Weiss did convince me that death was a part of an ongoing dynamism called life. Inculcated within the limitations of our mortal frame and relative experiences, our perception of death is bound to get transformed, at least I feel so, after reading Weiss. I could bear the shock of my father’s demise a couple of months ago on 16 March, because of what I would call the Weissian Maturity.

For over five-six days, I have been sensing the lurking death of yet another near and dear one – Taiji, the mother of my wife, Geeta. Listening to the footfalls of the foxily approaching end now does not scare me to the extent it would do earlier. It doesn’t even distract me from the routine course of life. Yet, shaken am I to the core at times, before succeeding in maintaining my calm. For as long as one is in the mortal frame, the impact of imminent death is bound to be there. Only yogis are supposed to have rendered themselves immune to it.

From my first day in that family I remember seeing an immense lust for life in Taiji. Despite bearing the hardships and trepidations of married life that happened to be the collective lot of hill brides then, I don’t remember seeing her ever complaining about the times gone by. Talking to her, I will always be assured that even a single swallow could make summers for her. It is too difficult to remember the occasional moments of exhilaration and verve alone from the past, much of which is otherwise a sordid tale of struggle and disillusionments. Till recently, she would often say smilingly, “I am not to be in the queue of the elderly people waiting for their death.”

Ten years ago she had to go for pacemaker insertion. By then she already had had over nine fractures and quite a few of them got healed well before they were even detected. Doctors would often get surprised with her blood pressure ranging as high as 100/220. For missing her regular dose of medicine she would always have a clever answer that she was too normal to remember the routine intake of drugs. The surgeon was thinking of resorting to amputation when the infection flared-up in one of her fingers crushed between the leaves of a door. It was just five years ago. Luckily, she recovered, avoiding the amputation. Her asthmatic ailment in the meanwhile kept on increasing with advancing years. The doctors have now given an emergency prescription saying that there is no point in bringing her to the hospital.

Despite these odds, following the death of Tauji four years ago, she took the firm decision to stay in her own house. Geeta being her only child wanted her to join us, but she refused politely. For the past two years, I haven’t seen her repeating her favourite one-liner – that she was not to be in the queue of the elderly people… With a blank look in her eyes she at times whispers to herself that even death seems to have forgotten to visit her. She now has stepped into the ninth decade of her life.

Since the last weekend we are with her. Geeta’s cousin living next door to her informed us on phone that she was having repeated convulsions and unconsciousness. Her condition is still critical. Save for the frequency and duration of these attacks, which are unpredictable, she appears to be normal, at least she tries to look normal. Yet, a lot is betrayed now and then. Her wizened face suddenly starts wearing impassive looks. Yesterday, the frequency of these attacks increased suddenly. Doctors say they are helpless. Probably, the power source of the pacemaker has exhausted itself.

Here I am sitting close to her double bed. The other half of her bed has been vacant for years together. Against the wall at the head of her bed is hung the portrait of Tauji. Tête-à-tête with decay and death when she is- what must have been transpiring in her mind- I know not. The very corner of her house, which she along with her husband succeeded in constructing in her younger days despite all limitations, is still the same. Quite unlike human beings, houses made of stones, concrete and cold steel don’t get old as long as they remain a home. Only those who inhabit them vacate the space for others. Most of the apparently lifeless objects here under the roof are still the same; even her daily routine hasn’t undergone much of a change in the past two-three years. Now, when she knows it for sure that the invisible thread connecting her with these humdrum surroundings may get snapped at any moment depriving her of the smell, sight & sounds so familiar -what must be her pent-up feelings?

Last evening, reclining in a hard-bed out there in the porch, she was surrounded by some elderly ladies from the neighbourhood. I overheard her telling one of them that enough was enough and now she wanted to bid good bye. For the first time in the past thirty years since I knew her, I could sense a muffled pathos in her voice -a sense of defeat. After the visitors were gone she got busy playing with the year old son of Geeta’s cousin. She then called her after a while to ensure that if she had asked the maid to peel karela and chop tamatar for the sabji that I relish so much, adding further that the daal cooked by her in the morning was very delicious. In a commanding voice she further warned her that payments for milk and other routine items were to be made from the cash kept in the almirah and she didn’t have to spend from her purse.

Mundane it may be but leaving this world for good probably is not that easy- despite the occasional spurt of the desire to do so. Seeing her, I am reminded of a poem on Jad Bharat by Toru Dutt. Denouncing detachment in an outright manner, she defends the filial love of the old recluse for the young deer as ‘divine’.

Fear of death or Thanatophobia as they call it ceases to be your constant companion and the canvas of life spontaneously stretches to the horizon. Forsaking this world dominated by struggles, ironies, disillusionments, injustice agony and what not, for the search of the alleged truth in the Himalayas must have always been the easiest thing to do. However, trying hard to keep on loving this mad, bad and sad world despite the haunting reminder that the curtain may fall at anytime; turning bravely your back towards death while in an intimate conversation with it –is definitely not everybody’s cup of tea.

Taiji you and your ilk do not require the crutches of Brain Weiss or Bhagvat Geeta to walk ahead. With your rickety walker you can do it with ease…
Hats off to you!

(The author is an amateur filmmaker, a photographer, and a writer, who has written over a thousand write-ups, reports, etc., published in the leading newspapers and magazines of the country. He can be reached at pant.rajshekhar@gmail.com) 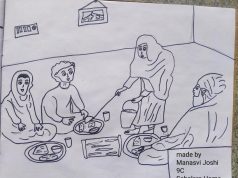