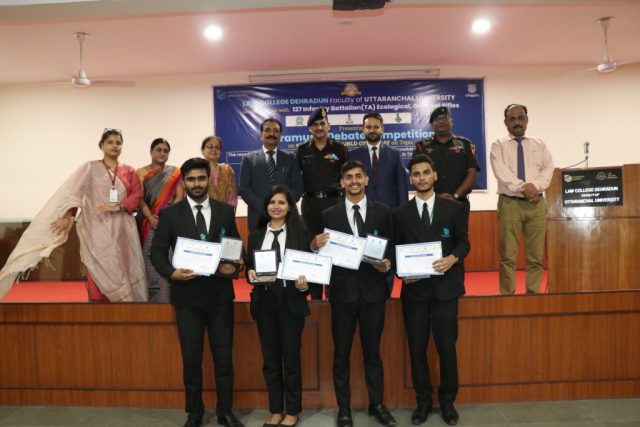 By Our Staff Reporter
Dehradun, 16 Sep: Law College Dehradun, Faculty of Uttaranchal University, in association with the 127 Battalion of Garhwal Rifles, organised a debate competition on the occasion of World Ozone Day. Commandant, Military Hospital, Brigadier Mohan Singh Bisht was the Chief Guest, while Commanding Officer of 127 Battalion of Garhwal Rifles, Col Rohit Srivastav, and Director (IT Services) Uttaranchal University, Dr Abhishek Joshi, were the special guests.
Ten participants entered the final round of the debate. The topic of the debate was “The race between developed and developing countries is responsible for the depletion of the Ozone Layer.” Kumar Ashutosh, Dr Shikha Uniyal Gairola and Smriti Uniyal were the judges.
Those speaking for the topic argued that the developmental contest between the developed and developing countries was adversely impacting the ozone layer. The same was refuted by the opponents on the grounds that sustainable development is the necessity of civilisation and the replenishment of the ozone layer mitigated the arguments of the proponents of the motion.
Shatabdi Sharma was declared the Best Hindi Speaker and Parth Narayan Singh was the Runner Up. Sparsh Tripathi and Swapnil Srivastava were adjudged the Best English Speaker and Runner Up, respectively.
Dean of Law College, Dr Rajesh Bahuguna stated that, in collaboration with 127 Battalion, the institution would work for environmental protection and awareness, along with related research. The battalion has been instrumental in greening the Mussoorie Hills, which was once deforested because of limestone quarrying.
Colonel Rohit Srivastava recalled his experience in West Bengal where an old man was trying to save the Starfish on the Kolkata sea shore by throwing them back in into the water. He said even small things make a big difference.
Brigadier Mohan Singh Bisht congratulated the debaters and complimented the students on the occasion of World Ozone Day. He admitted that people have changed their attitudes towards the environment and the trend must continue. He exhorted the new generation to take their environmental responsibilities seriously.
Also present were Dr Poonam Rawat, Kumar Ashutosh, Amit Chaudhary, Dr Shikha Uniyal Gairola, Smriti Uniyal, faculty members and students.

Garhwal Post has established itself as a credible, balanced and forward looking newspaper in India. Based in Uttarakhand, the daily is read by the aware, socially and culturally responsible, high-income elite of society.
Contact us: info@garhwalpost.in
https://garhwalpost.in/free-dating-sites-no-charges-ever/