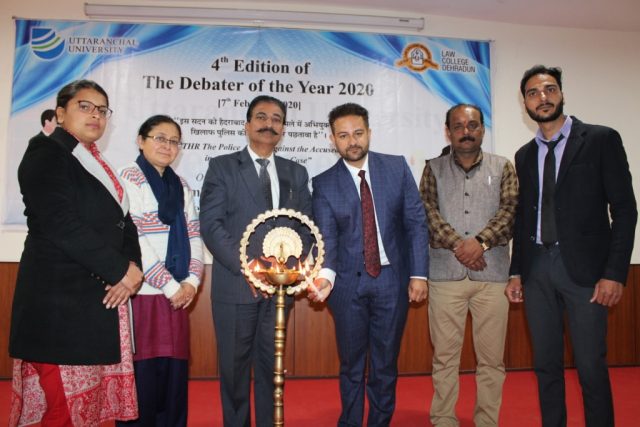 Dehradun, 7 Feb: The 4th Edition of the Debater of the Year 2020 Competition was organised at Law College Dehradun, Uttaranchal University. Varsity Director Dr Abhishek Joshi was present as the Chief Guest, while Dr Poonam Rawat, Smriti Uniyal and Kumar Ashutosh were present as judges of the debating event.
As many as 14 participants competed in the final round. The topic of the Debate was: “This House regrets the police action against the accused of Hyderabad Rape Case”. Participants presented unassailable arguments on strict and speedy punishment in cases related to heinous crimes like rape. Participants speaking in favour of the motion argued that police action in the Hyderabad rape case was a clear cut violation of the principle of rule of law and was translated into practice to dilute popular backlash and resentment against the crime. They further maintained that such practices would ultimately lead to anarchy in the country.
However, participants speaking against the motion contended that police action was justified and not a violation of rule of law as it was resorted to in self defence. They further highlighted the lapses in the judicial system in rape cases as it often results into delayed justice.
In a tough contest, Shatakshi Sharma and Urmila Saluja were declared as best Hindi and English Debaters of the Year 2020, respectively.
Principal Dr Rajesh Bahuguna maintained that research and debate on current and burning issues were not only indispensable but a key to success for law students. Moreover, he offered tips regarding healthy and standard debates and offered valuable insights on various legal aspects of the topic.
Dr Abhishek Joshi gave a cash prize of Rs 4200 along with a trophy to the winners. The entire event was covered by the students of School of Media and Communication Studies, Uttaranchal University.
Also present on the occasion were Dr Poonam Rawat, Kumar Ashutosh, Smriti Uniyal, Amit Kumar, Dr V Bhuvneshwari, Vaibhav Uniyal, Mayurakhi Sonowal and hundreds of students.

Garhwal Post has established itself as a credible, balanced and forward looking newspaper in India. Based in Uttarakhand, the daily is read by the aware, socially and culturally responsible, high-income elite of society.
Contact us: info@garhwalpost.in
https://garhwalpost.in/george-cervantes-matchmaker/ dating website for metalheads