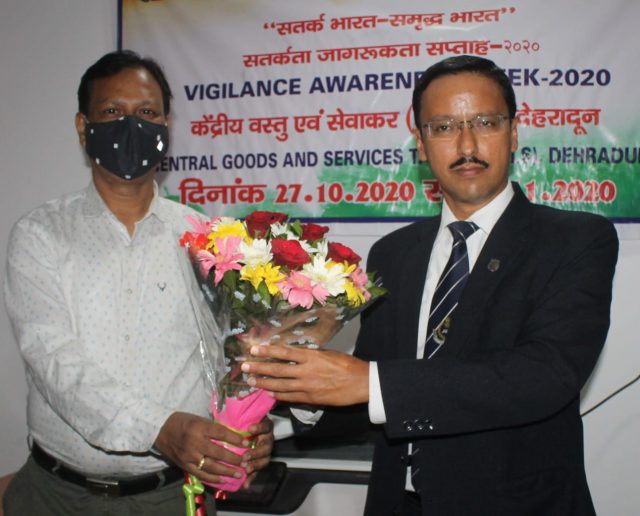 Dehradun, 9 Nov: Deepankar Aron, IRS, (Indirect Taxes and Customs) has taken over charge as Commissioner, GST (Appeals), Dehradun, for Uttarakhand on the 20th Formation Day of the state. He was holding the post of ADG, DRI (Additional Director General, Directorate of Revenue Intelligence), in Kolkata just before taking over the new charge – an assignment in which he was responsible for combating cross border crime such as gold smuggling, import-export frauds, trade based money laundering, drug trafficking, FICN and wildlife smuggling in eastern India and also north eastern India for some time.
He is not new to the state as not only was he born and brought up here in BHEL, Haridwar, but he also served the state earlier as Deputy Commissioner for Excise, Service Tax and Customs, Dehradun, in charge of Garhwal region from 2001 to 2005, when apart from collecting revenue for the Central Government, he also made a significant contribution towards implemention of the New Industrial Policy in Uttarakhand.
An IRS officer of the 1996 batch, he did his BTech in Electrical Engineering and MTech in Energy Studies, both, from IIT Delhi. A National Talent Scholar, before joining the Civil Service, he worked as Research Assistant at the Centre for Policy Research, New Delhi.
From 2012 to 2015, he represented India as Consul in the Consulate General of India in Hong Kong. In 2009, he undertook the Kailash Manasarovar Yatra as the Liaison Officer for the Union Ministry of External Affairs. He has also represented the country at the World Customs Organisation and at various other international conferences on Customs and Enforcement. In 2019, he coordinated a global operation, the first ever for Indian Customs, called ‘Operation Sesha’ for combating smuggling of CITES listed species of timber. The operation, which was joined by 66 countries, saw seizure of more than 600 MT of endangered species of timber.
He has been conferred the Presidential Award for specially distinguished record of service for his contribution as an IRS officer.
A writer and photographer, Deepankar Aron has travelled extensively within and outside the country. His articles on travel, nature and heritage have, over the years, appeared in various magazines and newspapers, both national and international.
World Heritage Sites of Uttarakhand, his first pictorial book, was published in 2010. The book, a first on the subject, travels from the world famous Valley of Flowers National Park to Nanda Devi National Park. It was released on 1 June, 2010, at the Wild Life Institute of India, Dehradun, during an international conference on World Heritage Sites for Asia Pacific region in the presence of UNESCO Secretary General by the Union Minister for Culture and Madan Kaushik, Tourism Minister of Uttarakhand.
His new illustrated book, ‘On the Trail of Buddha – A Journey to the East’, has just been published. The book explores spiritual, philosophical and cultural linkages that connect India to East Asia, through a series of travelogues to close to 100 destinations in East Asia which culminate in the discovery of ‘Ancient India’ beautifully preserved in East Asia. The book was released by Jagdeep Dhankar, the Governor of West Bengal in Kolkata, last month, in the presence of First Lady Sudesh Dhankar, Nakamura Yutaka – Consul General of Japan in Kolkata, P Seewalee Thero, General Secretary of the Maha Bodhi Society of India, and Park Young Seaon, Director, Korea Trade Investment Promotion Agency.