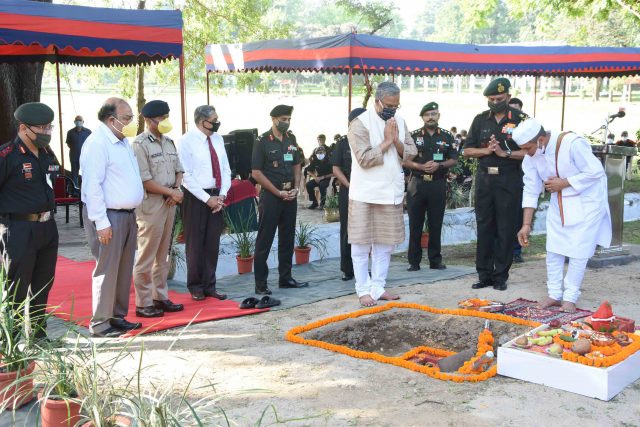 Dehradun, 28 Sep: Defence Minister Rajnath Singh laid the foundation stone for construction of two underpasses at the Indian Military Academy here, today, over the internet. Once completed, the underpasses will fuse the North, Central and South campuses of IMA into one integrated unit. The project would also permit uninterrupted flow of traffic on NH-72, which would no longer have to be crossed by Gentlemen Cadets and Staff of IMA when they move between various training facilities of the prestigious Academy.
The inauguration was done electronically from New Delhi by the Defence Minister and was e-witnessed by the CDS, General Bipin Rawat, Chief of Army Staff General MM Naravane, and GOC-in-C, Army Training Command, Lieutenant General Raj Shukla.
Chief Minister Trivendra Singh Rawat, Commandant, IMA, Lieutenant General Jaiveer Singh Negi, Deputy Commandant & Chief Instructor, IMA, Major General Jagjit Singh Mangat, and GOC, Uttarakhand Sub Area, Major General RS Thakur, Chief Secretary Om Prakash and DGP Anil Raturi did the honours on behalf of the Raksha Mantri.
The project, which was originally conceived way back in 1978, fulfills the dual aim of ameliorating incessant traffic jams on the NH-72 (Chakrata Road) and enhancing the security set-up of IMA. The underpasses are planned to be constructed by the NHAI within a span of two years at an approximate cost of Rs 45 Crores.
Brigadier Sujeet Kishore Narain, Brigadier, Administration, IMA, and Colonel Nitin Thapa, Colonel General Staff, IMA, were the key organisers of the event.