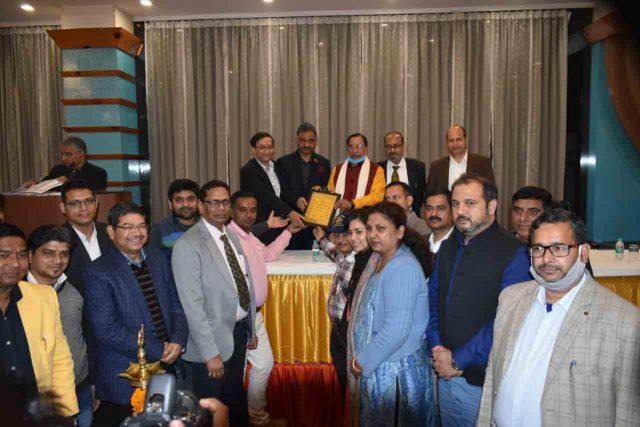 By Our Staff Reporter
Dehradun, 22 Feb: The PRSI National Awards-2020 presentation was organised online by the Public Relations Society of India. The programme was conducted by the Dehradun Chapter, which connected more than 2500 members of 25 chapters across the country in online mode.
Chief Guest Governor Baby Rani Maurya said that all officials and members deserved congratulations for organising the National Awards Ceremony, as also those had received the awards. She acknowledged that, through public relations and communication, PRSI was always ready to disseminate important information related to public welfare. Even during Covid-19 times, the organisation has played an active role. In the era of social media, dissemination of right information to society was a very important task. She expressed confidence that all the members of PRSI would always play a role in publicising important schemes and programmes.
Presiding over the programme, Union Minister of Education Dr Ramesh Pokhriyal ‘Nishank’ said that PRSI plays an important role in promoting public welfare policies. Dr Nishank praised PRSI for disseminating important information on the New Education Policy 2020 to the general public.
All the members of PRSI Dehradun Chapter were present offline in Dehradun. The programme was inaugurated by Rajya Sabha MP Naresh Bansal, Director General, UCOST, Dr Rajendra Dobhal, National President of PRSI Dr Ajit Pathak, and Dehradun Chapter Chairman Amit Pokhriyal. Dehradun Chapter was awarded as the Best Chapter out of 25 Chapters across the country, along with the Best Secretary Award. The awards were presented by Rajya Sabha MP Naresh Bansal.
Bansal said that public relations made an important contribution in present times. There is need for public relations in every field. He added that PRSI is doing good work and had many chapters across the country that included public relations officers of various government and non-governmental organisations. He said that PRSI should work actively in publicising the public welfare schemes of the Central and State Governments to the common people.
Director General, UCOST, Dr Rajendra Dobhal said that public relations is the only area through which one can reach out to the society in simple language. He said that every day a new phenomenon happens in the field of science, about which it is necessary to be informed in simple language. He said that due to lack of complete knowledge about glacier science, many types of confusion arose in society. Giving the example of the disaster in Tapovan-Rishiganga, he said that the incident should be investigated properly from the scientific point of view. He said that there is a need to set up separate institutions for studying glaciers.
On this occasion, Amit Pokhriyal, Chairman of PRSI Dehradun Chapter, expressed his joy and congratulated his entire team for getting the Best Chapter of the Year Award 2020. Also present on the occasion were Amarnath Tripathy, Secretary; Anil Sati, Treasurer; Suresh Chandra Bhatt; Joint Secretary, Rakesh Dobhal; Pooja Pokhriyal, National Council Member; Vimal Dabral, Anil Verma; Dr DP Uniyal, Ajay Dabral, Vaibhav Goyal, Akash Sharma, Mahesh Khankariyal, Sanjay Bisht, Jyoti Negi, etc.