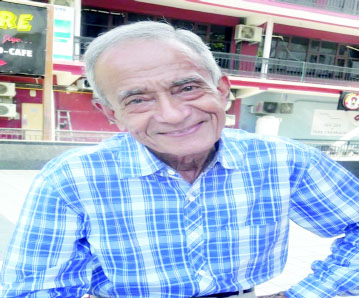 By OUR STAFF REPORTER
DEHRADUN, 21 Jan: BM Seth, General Manager at SK Oilfield Equipment Co Pvt Ltd, passed away yesterday at his Hari Vihar residence. He was 73.
Seth was suffering for quite some time from a stomach ailment and was operated upon at the Synergy Hospital and later kept on a ventilator for nearly two weeks. He was brought home only the day before but his condition continued to deteriorate. He was cremated this morning.
Popularly known as Seth Saab, he was an institution by himself. He had joined SK Oilfield in 1985 and had become its general manager many years ago. His principal job was to maintain contacts with ONGC, KDMIPE, ONGC Academy, Institute of Drilling Technology and the like and he had succeeded in establishing a good rapport with the customers. In fact, he was a link between the Mumbai office of SK Oilfield and the various divisions and departments of ONGC.
Seth, over the years, had become a part of the extended Kanwar family and had won the respect and admiration of even distant relatives.
Seth was born in Giridih district of Bihar (now Jharkhand). His father, SKP Seth, was manager in Allahabad Bank. He had spent his childhood in various towns where his father was posted. Seth was an alumnus of Colvin Taluqdars’ College, Lucknow, and later graduated from Bareilly.
He also began his career with Allahabad Bank in Calcutta. However, he decided to resign his secure job and shifted to Paonta Sahib to start his own business.
He leaves behind his wife Rita, daughter Ankita, son-in-law Tarun and grandson Kartik, besides other close relatives.