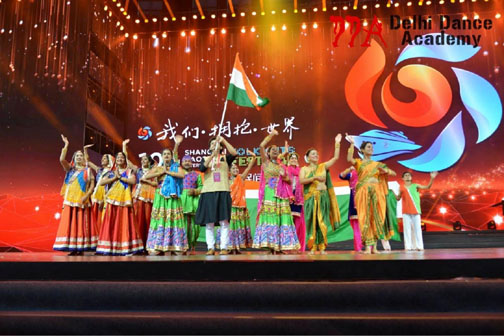 The festival was first organised by the Baoshan International Folk Arts Exchange and Re­search Centre in 1995 with the aim of developing international cultural exchanges. It is an important part of the Shanghai International Arts Festival, which is hosted by the Chinese Ministry of Culture and the Shanghai People’s Government. Since then to now, 3000 foreign artists of 123 art ensembles from Germany, Switzerland, Spain, Poland, Belgium, Russia, Serbia, Bulgaria, Italy, Austria, Croatia, France, United Kingdom, Netherlands, Greece, Brazil, Chile, the United States, Mexico, Canada, Australia, New Zealand, Indonesia, South Korea, Japan, India, Turkey, Egypt, South Africa, etc., more than 50 countries and regions have participated, bridging people who are different in language and culture.

The 10 day programme kicked off on 25 October with a welcome dinner held in the presence of Chinese government officials and delegates. Leaders of all the 12 participating nations were seated together over dinner and were enthralled by selected dance performances put up by India as the energetic Ganesh Vandana, which was heartily appreciated by everyone.

The opening ceremony was held on 27 October, marked by a parade on Mudanjiang Road featuring traditional dance performances from all the countries. Over 140,000 spectators turned out for the parade and cheered each nation. DDA showcased the country’s rich and diverse culture with its cheerful music and traditional folk and classical dance forms and strengthened the cultural ties with the participating nations. Following this was a breathtaking dance performance in front of a packed Chinese audience on the grand stage of SBIAF.

Apart from an extensive lineup of stage performances held on each of the following days, the programme also featured a series of exhibitions and hands-on events in the sport complexes, school, theatres, the famous Shanghai Music Square and Tower, etc., during the 10 day tour. The closing day witnessed various performances from professional Chinese artists where Team India was felicitated with Excellent Performance Award amongst all participating nations. The performances were choreographed by Gurmeet Singh, an Odissi dancer, and the lead choreographer of the folk dance division at Delhi Dance Academy. Nazir Anwar, Director of DDA, says, “It was indeed a great opportunity for the team to represent Indian culture in the form of classical and folk dances, where we not only held the Tiranga high, but also got to interact and learn so much about different cultural practices, dances and theatre forms from our friendly foreign countries.” The other team members included Girish, Swathika, Dhwani, Meenakshi, Hemcy, Prerna Vats, Himanshi, Kashish, Prerna, Dheeshma, Sushant, Vikrant, Tarunima, Meraz, Bhaskar, Vaishanavi, Aniket, and Simran.