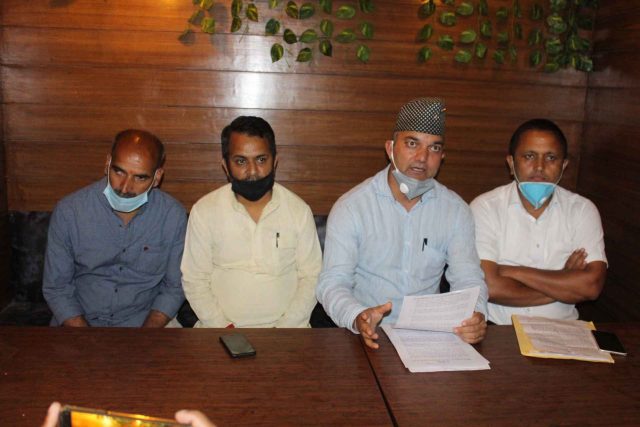 MUSSOORIE, 18 Jun: Public representatives from Rawain, Jaunpur, Jaunsar Bawar of Yamuna Valley have demanded that the state and central governments connect their area with the Chardham Highway Development Project and Char Dham Railway Scheme.
At a press conference organised here, today, Pradeep Kavi Bitu, Jot Singh Rawat, Deshpal Panwar, Dinesh Cantura and Amendra Bisht said that the people of the Yamuna Valley were not getting the benefits of the Chardham highway project and the railway project. They alleged the state and central governments were adopting a discriminatory policy against the people of the Yamuna Valley due to which development work was being affected. They demanded that the Central Government include the Yamuna Valley in the Chardham Highway Development Project and the Chardham Railway Scheme. They said that in the three districts of Dehradun, Uttarkashi and Tehri, eight assembly constituencies including of Yamuna Valley, Sahaspur, Vikasnagar, Chakrata, Dhanaulti, Yamunotri and Purola, about 12 lakh people would benefit.
They said that, if the Central Government connects the Yamuna Valley with the aforementioned projects, it would benefit millions of pilgrims from the neighbouring states of Himachal, Uttar Pradesh, Haryana, Delhi, Punjab, and Rajasthan every year. It would create new tourist places in the valley, employment opportunities would also increase. It will also be a major contributor to preventing migration. They threatened a huge agitation against the state and central governments if their demands are not met.