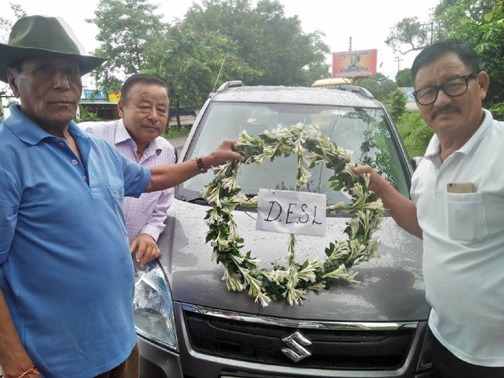 Dehradun, 20 Aug: Many ESM of Dehradun Ex-Servicemen’s League (DESL) attended the last rites of L/NK Sandeep Thapa, who was martyred on Saturday in an exchange of fire with Pakistani troops in J&K.
Sandeep belonged to the 3/5 Gorkha Rifles and was posted in the Nowshera Sector of Rajouri District, J&K. He was only 33 years old and had joined 3/5 GR in 2004. He was married to Nisha in 2012. They have a 3 year old son. His younger brother, Naveen is also posted in Rajouri Sector of J&K.
Sandeep’s wife Nisha, mother Radha Devi and father Bhagwan Singh Thapa got a great shock on hearing the news. Sandeep’s family has been rendering meritorious services to the Indian Army for the last five generations. A large number of people reached his residence at Paudwala Rajawala village to pay homage. When Sandeep’s three year old son touched his feet before the pyre was lit, everyone was in tears. Sandeep’s father Bhagwan Singh lit the pyre. Hundreds of people including a large number of ex-Serviceman of Doon Valley including Cols US Thakur, President, DESL, BM Thapa, BS Shahi, Capts Ashok Limbu, GS Rawat, Neel Thapa, AS Bhandari, Subs SJ Thapa, BS Thakur, PS Gurung, LB Thapa, KB Thapa, Prakash Chandola, and many others attended the last rites. Chief Minister Trivendra Singh Rawat also paid respect to the martyred soldier.