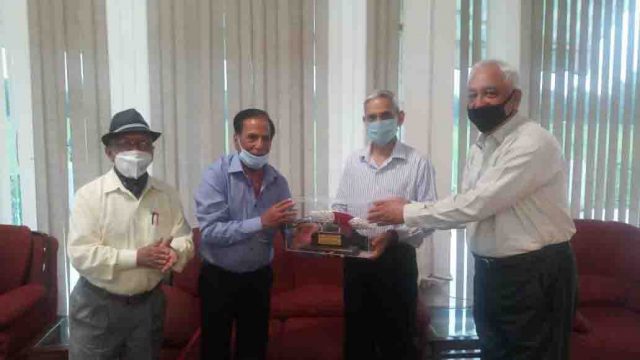 Dehradun, 8 Dec: During the Executive Committee meeting of Dehradun Ex-Services League (DESL), which was held under the aegis of Col US Thakur (Retd), President, appreciation was expressed for all the welfare support for ESM families rendered by Maj Gen RS Thakur, General Officer Commanding, Uttarakhand Sub Area and his staff officers.
Col Thakur pointed out that, at the present, the danger of war was looming near the borders and, also, the Covid-19 pandemic was spreading in the country. As such, the forces are facing multiple challenges. Despite this, the GOC, Uttarakhand Sub Area, had always come forward to help the ESM family fraternity in all respects, which made every Doonite proud.
He added that Brig VK Patra, Commandant, Military Hospital(MH), who is an excellent surgical specialist, was also helping ESM families day and night by arranging separate special accommodation in MH for them to look after Covid-19 patients, and for testing and treatment.
Lt Col BM Thapa (Retd), Senior Vice President, DESL, advised all to take precautionary measures in all 26 Shakhas against Covid-19 by maintaining social distancing, using proper masks and also avoiding crowded places.
Col Thapa informed all that the retirement age and pension policy proposed by the Chief of Defence Staff (CDS) had irked several among the serving and veteran fraternities. Department of Military Affairs (DMA), recently, announced the proposal to increase the retirement age of all officers in the defence forces by one to three years by April 2021. According to DMA, the extension of retirement age has been proposed with the intention to retain the highly skilled manpower. The letter also, incidentally, proposes a proportionate decrease of their pension based on their length of service.
The retirement age and pension proposal by CDS under DMA envisages enhancing the retirement age of Colonels in Army and equivalent ranks in the Air Force and Navy. The age would now be increased to 57 from the existing 54 years. Previously, the retirement age for Brigadiers and their equivalents was 56 years, though the new proposal requires them to retire at the age of 58 years with two additional years of service. Further, Major Generals would retire at the age of 59 instead of the existing 58. However, the retirement age of Lieutenant Generals would remain unchanged at 60. Additionally, the retirement age for junior commissioned officers and Jawans in logistics, technical and medical branches has been increased to 57 years.
He further explained that the idea of age enhancement might not be appreciated because of rising ‘dead-wood liabilities’ after suspension of officers. The disadvantage of age enhancement, besides leading to ageing Colonels/Commanding Officers (CO), would also create a huge flock of disgruntled officers. It would also block vacancies in the rank of Colonels for five more years and thus the age of COs would go up by five years. Only young officers can fight well at the border as youngsters are better motivated and smarter. Veterans of the Armed forces are a great talent pool. If retrained, they can do wonders for the growth of the Nation. But encouraging them to hang on by reducing pension would prove a disaster.
Col Thapa added that Brig Kartar Singh (Retd) President, Indian Ex-Services League (IESL), which is recognised by Government of India has also written to Defence Minister Rajnath Singh that denial of NFU, which has been given to all class 1 officers cadre but denied for defence forces, OROP having been granted but not revised with effect from 1 July, 2019, as promised by the Government, and reduction of pension disturbed the peace of mind, quality of life of ESM fraternity and is most demoralising for the entire Defence Forces.