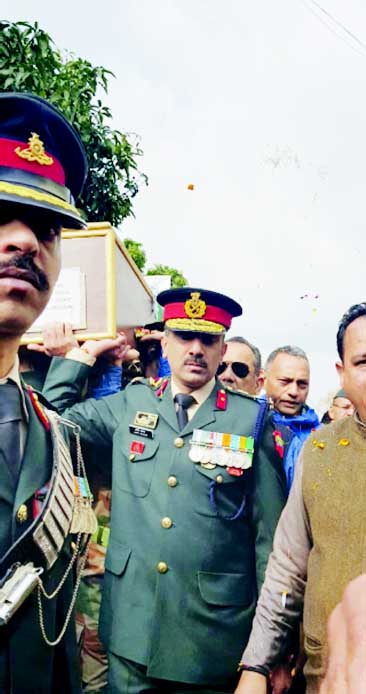 By OUR STAFF REPORTER
DEHRADUN, 19 Feb: Maj Vibhuti Shankar Dhaundiyal, resident of Dangwal Road, was martyred yesterday with four others during an encounter at Pulwama in J&K.
Col BM Thapa (Retd) Senior Vice President, Dehradun Ex-Services League, and other members visited his residence and paid homage. They met the family members including Nikita, wife of the martyr, who was married only 8 months ago. Vibhuti belonged to Village Dhoundi of Pauri. He was the only son of his father, the late Om Prakash Dhaundiyal, who died in 2012. He had retired from the Air Force as Senior Audit Officer.
Vibhuti was the youngest in the family and the only son, with three sisters. The eldest sister, Pooja, is married to an Army Colonel, the youngest sister, Priyanka, is settled in the USA and third sister Vaishnavi is unmarried and teaching in one of the schools of Doon Valley.
Martyr Dhaundiyal made the supreme sacrifice in the service of the nation and made the people proud.
According to Lt Col BM Thapa (Retd), Senior Vice President, DESL has asserted that the sacrifice would not go in vain, but government should take care of the families of Veer Narees in every way as they are forgotten after sometime and not taken care of as done in other countries.