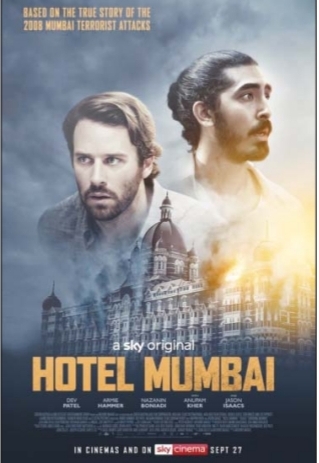 The nerve-wrecking memories of the terror attack on 26 November 2008 that rattled Mumbai with fear remains a gut-wrenching event in the minds of all. It was the dreadful night when terrorists were bent upon breaking the back of the country’s faith in its security and safety. The malicious aim was to kill as many as possible present at CST, Hotel Trident, Leopold café, Cama Hospital and the iconic Taj Palace Hotel; all of which became prey to the barbarous act. The majestic Taj Hotel standing tall on the Arabian sea, a view to die for has always stood as an iconic symbol of pride and hospitality. The architecturally rich heritage building known for exquisite food and decor, a place that provides paradisiacal treatment to its guests was converted into a perilous zone. The helpless souls struggled to escape the shower of bullets, blood splattered everywhere and grenade- damaged are as burning the lavishness in hours was a pitiful site. Hotel Mumbai captures the essence of Taj in a simplistic way. It’s running a normal business day, the staff courteously attending to the guests, lending a personalised touch to their needs, the ‘strict’ head chef checking the nails and uniform of the staff, the housekeeping-in-charge trying to bring the temperature of the water in the bath tub to the required degree as per the liking of are peating guest. In seconds, it was conveyed that for Taj ‘Guest is God’. Instantly the scene changes, from heaven-to- hell. Terrorists enter and start shooting. The mindless firing by four gunners suddenly shivers the nerves. A few of the guests and staff never lived another day, many suffered irreparable emotional and physical wounds, others lost their loved ones, and the survivors are still haunted by the nerve-chilling memories of the day. Hotel Mumbai directed by the award-winning director Anthony Maras narrows down the harrowing experience on ground zero, not dwelling into the details, focussing on the selected events inside the hotel with few characters as guests, terrorists and hotel staff. Few cinematic liberties in fictionalising the script are taken to make it an admissible experience. The ones inside the ring were in hell and those watching the live coverage outside were equally traumatised and all this has been picturised as close to reality as possible, nowhere manipulating the emotions of the sufferers. Hotel Mumbai depicts the trauma and tragedy that struck like lightning on the dreadful night when ten terrorists entered Mumbai on a boat. They spring on their feet and without wasting a minute, easily mix with the crowd on the street, pick up taxis and head towards their designated targets while constantly receiving senseless and in humanly incessant instructions from a ruthless handler through phone who showed no mercy in his instructions ordering them to shoot innocent people who came their way. The heavy atmosphere has been tuned appropriately by the a bled director and background score. The film maintains its chilling temperament all throughout its running, giving not a single moment to relax. The danger lurks in every room, at every turn, behind pillars, in the corridors. The camera makes one sniff danger every second as the hypnotised men work like robots, loaded with guns and ammunition, with shoot-at-sight orders, walk with the command of death in their hands; the air is suffocating. Hotel Mumbai is a technically rich film in terms of cinematography, sound, screenplay, visual appeal and background score. All the faculties make the experience realistic that has fear, tragedy, tension and death lurking at every step; a situation where even the best of cognitive skills and physical abilities will fail against the brain-washed gunners. The script is cleverly written. It highlights only the handful of brave-hearts, the true heroes in ordinary cloaks, chosen for the task who are forcefully thrown in the terror- pool of fear and blood. How the different people from varied caste, country, race, religion, socio-economic background, perfect strangers unite to survive through the gruelling circumstances despite their differences has been depicted well. Arjun (Dev Patel), the waiter, Chef Hemant Oberoi (Anupam Kher), Arnie Hammer and Nazanin Boniadi, a guest couple with a baby and a nanny (Tilda Cobham), Jason Isaacsa former Russian special agent; all stuck in this treacherous spot, yet behave courageous in their respective zone. Out of all the refined cast, Dev Patel stands out in terms of acting, screen presence, expressions and role. He is shown as a selfless human, who is fully aware of his responsibilities back home with full-term pregnant wife with a small child yet displays no hesitance towards slightest of fear in the need of the moment. He shines in all the frames. Anupam Kher with calm and devoted demeanour tries to evacuate the tension that builds up in the minds of the guests, not letting his exterior texture being affected by the fear within. All other major actors too remain in complete sync with their roles. The film subtly points at the unpreparedness of the police. The helplessness displayed through the unsophisticated weapons in the hands of police personnel against the AK47 rifles carried by gunners is a pitiable sight. Their courageous step to barge into the hotel to save hostages while being fully aware of the ground reality, holding the fort till the special force arrived from Delhi is commendable. But this is just a running glimpse, primary focus is on the valour shown by the chosen ones. Hotel Mumbai digs many old wounds. It makes us learn few hard lessons and points towards the urgency to prepare citizens for unabated terror disasters. In all this mayhem, the heroic characters restore faith in humanity that human in us still thrives to help, our heart continues to beat for another human in times of crisis, we are still stirred by other person’s pitiful plight and for some ‘duty before self’ still works. Watch the film for its humane representation of unsung heroes and not truly as a political thriller.