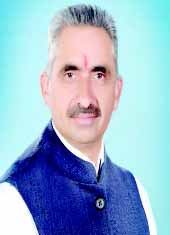 DEHRADUN, 29 Jan: It was more than two months ago that polls were held for urban local bodies in Uttarakhand. The BJP had comfortably won the Dehradun Municipal Corporation poll, for which voting was held on 18 November, 2018. Yet, in these two months, there has been hardly any serious effort on the part of either the newly elected Mayor Sunil Uniyal Gama or the Board officials to hold the first meeting of the newly elected board. In the absence of any such meeting, many proposals on construction of new colony roads, installation of street lights in new areas that have come under the jurisdiction of the Municipal Corporation for the first time, appointment of additional contract sanitation workers, proposals to revise house tax on commercial buildings, etc., are getting unnecessarily delayed.
Actually, keeping the upcoming General Elections in mind, the newly elected Mayor Gama ought to have been in a hurry to get many proposals cleared so that tenders for those works could be floated and contracts awarded before the Model Code of Conduct comes into force. Otherwise all development works are bound to be delayed by many months.
Interestingly, soon after the municipal polls, the Trivendra Singh Rawat Government had in a cabinet meeting taken several important decisions towards granting greater autonomy to the Nagar Nigams and other municipal councils on clearance of proposals for which they had to seek the government approval in the past. However, in spite of this advantage which the predecessor of Gama, Vinod Chamoli never had, he seems to be in no hurry to hold his first board meeting and ensure passage of important proposals. As compared to earlier rules, mayors are now authorised to sanction projects costing up to Rs 12 lakhs, whereas previously, the mayors could only sanction up to Rs 1 lakh, only! While, previously, the Nagar Nigam Board was authorised to sanction projects costing less than Rs 10 lakhs, the boards can now sanction projects without any financial limits, at least theoretically, and without seeking approval of the state government! However, the bigger question is that the Nagar Nigam has limited income sources and it is not going to be easy to find resources for major or mega projects!
Of course, this authority does allow the Nigam Boards to seek external funds from various funding agencies on its own! The state government has also released an amount of Rs 65.66 crores for the Nagar Nigams. But without the Nigam Board’s approval, it is not easy to comprehend how the funds can be utilised before the end of the current financial year (ending 31 March, 2019)!
Speaking to this correspondent, some newly elected municipal corporators expressed their disappointment over delay in holding the first board meeting of the newly elected board. They claimed that applications from the residents of their respective wards for construction of colony roads and installation of street lights were piling up even as they were still waiting for the board meeting to be held. They claimed that some routine works were underway but most of them didn’t require board approval anyway.