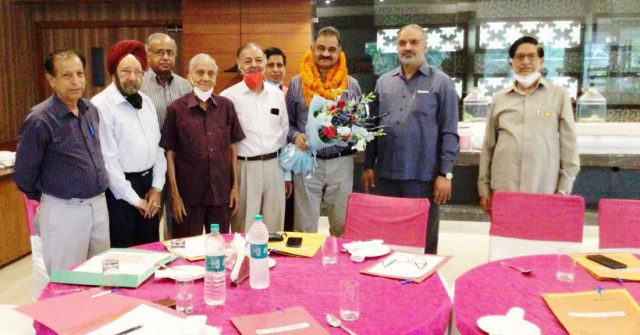 Dehradun, 18 Jul: At a special meeting of University Journal of Phytochemistry and Ayurvedic Heights (UJPAH) held at Hotal Madhuban here, today, Dr Rajendra Dobhal, DG, UCOST, was felicitated by Dr S Farooq, President, UJPAH, and all members present, for his nomination as a member of UGC Bhopal.
Presided over by Dr Ashwani Kumar, Chief Editor, Dr S Farooq welcomed the Chief Guest by presenting a bouquet and said it was a great honour for UJPAH that he had been nominated to UGC Bhopal. He is also a member of the Atomic Energy Commission, University Grants Commission Inter University Centre of Indore and Exceptional and Specific Category of Scientist in India and part of the Management of the University Journal of Phytochemistry and Ayurvedic Heights. He praised his valuable suggestions as a Scientist.
Chief Guest Dr Rajendra Dobhal in his address provided details about his scientific work in younger days and how, in later years, it was implemented in MP and saved crores of rupees that were being lost in the absence of gamma ray treatment of Potato, Onion, etc., crops in the ware houses.
Present on the occasion were Dr IP Saxena, Editor, Dr IP Pandey, Dr Himmat Singh, Guest of Honour, Dr RK Singh, Dr AK Gupta, Dr Sanjay Naithani and RK Bakshi.

Garhwal Post has established itself as a credible, balanced and forward looking newspaper in India. Based in Uttarakhand, the daily is read by the aware, socially and culturally responsible, high-income elite of society.
Contact us: info@garhwalpost.in
https://garhwalpost.in/best-dating-sites-uk-for-over-50/ iceland women dating