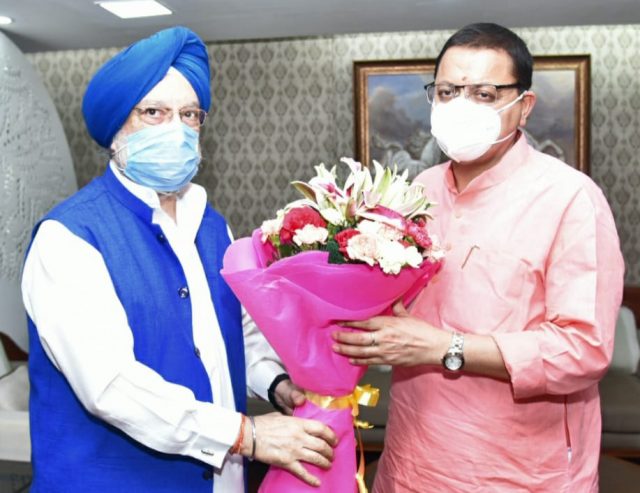 By Our Staff Reporter
Dehradun, 10 Jul: Chief Minister Pushkar Singh Dhami called on Union Minister, Housing and Urban Development, Hardeep Singh Puri in New Delhi today. The Chief Minister urged the remaining amount due in respect of legacy waste and sold waste dumping sites related to 8 Municipal bodies of Uttarakhand to be released soon. The Chief Minister urged Puri for budget allocation for Uttarakhand  for solid waste management projects under the Swachh Bharat Mission-2 of the Union Government to be increased from Rs 89 crores to Rs 150 crores so that the said schemes and projects could be implemented at the earliest.
The Chief Minister said that with the help and cooperation and under the guidance of the Government of India, efforts were seriously made to achieve the targets set up under the Swachh Bharat Mission by the department of Housing and Urban Affairs in Uttarakhand. He added that as directed by the Ministry of Housing and Urban Affairs, a Detailed Project Report (DPR) of an estimated cost of Rs 126 crores for the 8 Legacy Waste / Old Dumping Sites from 9 Municipal bodies of the state had been sent to the Union Government for approval and acceptance. An amount of Rs 48.78 lakhs had been released by the Government of India for the processing  charges.
On this occasion, the Chief Secretary of Uttarakhand Sukhbir Singh Sandhu, Additional Chief Secretary Anand Vardhan, Secretary Shailesh Bagoli were also present.
Later the CM also called on Union Heavy Industries Minister Mahendra Nath Pandey, and Union Agriculture Minister Narendra Singh Tomar.

Garhwal Post has established itself as a credible, balanced and forward looking newspaper in India. Based in Uttarakhand, the daily is read by the aware, socially and culturally responsible, high-income elite of society.
Contact us: info@garhwalpost.in
muslim speed dating manchester