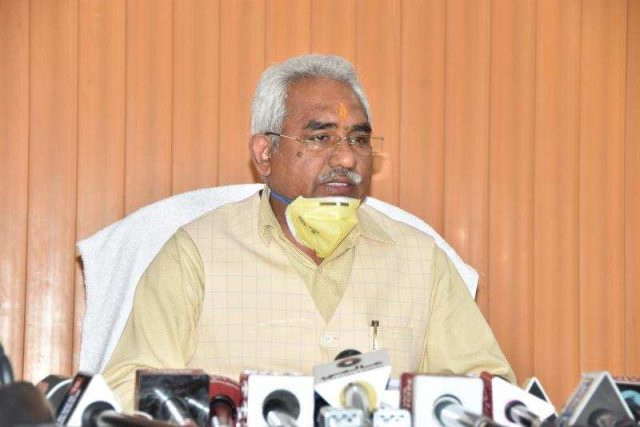 By Our Staff Reporter
Dehradun 3 Aug: BJP State President Madan Kaushik claimed, today, that BJP would perform very well in the upcoming assembly elections and that the party workers as well as the people were happy that the reins of the state were now in the hands of a young leader. Kaushik said this while having an informal discussion with media persons at the BJP State Headquarters, here, today.
He was commenting on the performance of the new Chief Minister Pushkar Singh Dhami on completion of one month in power. Kaushik claimed it was a golden month in the history of the state’s politics and added that Dhami had given a clear direction and focus to development the state. He added that the young CM was energetic and hardworking and in his first month had proven his mettle as a leader. He had also given ample evidence of his commitment to development and resolving problems in the state. The government was making every effort to reach out to the last person in the remotest corner of the state.
Kaushik claimed that, as had been decided by the party, the ministers, the MLAs and the party office bearers were touring every part of the state, speaking to the people and taking their feedback. They were listening to the problems of the people so that the government could take necessary action on resolving problems.
The BJP leader further claimed that the party was focussed on going ahead with the roadmap prepared by the party for the 2022 elections. The programmes had been charted out and were being implemented statewide. This month, several workshops would be organised at the state level in which senior leaders, party workers and full time volunteers would participate. Kaushik added that the BJP would reach out to the people and make them aware of the party’s achievements and plans. He claimed that there was no hesitation in the party regarding meeting people as the BJP was fully committed to development and welfare of the people.
Taking a jibe at the Congress leadership in Uttarakhand, the BJP President claimed that the senior leaders in Uttarakhand were busy fighting among themselves instead of playing the role of a constructive opposition party in the state. The Congress legislators were not serious inside the house and also failed to work on the ground, either, he claimed. He added that through its inertia, the Congress had lost the faith of the people. Even during the Corona pandemic, the public saw the reality of the Congress. Instead of social service, they were only involved in demonstrations. Congress only wanted power, which was understood by the public.
Kaushik claimed that the Congress was now trying to indulge in various kinds of dramas as the elections were coming but this would not benefit it. The people had seen that Congress had failed to reach out to the people and help them during the pandemic even as the BJP workers were sincerely engaged in public service. The only activity that the Congress leaders engaged in was staging dharnas but the people had realised its hypocrisy, Kaushik asserted.

Garhwal Post has established itself as a credible, balanced and forward looking newspaper in India. Based in Uttarakhand, the daily is read by the aware, socially and culturally responsible, high-income elite of society.
Contact us: info@garhwalpost.in
https://garhwalpost.in/i-kissed-dating-goodbye/ https://garhwalpost.in/dating-sites-horny/