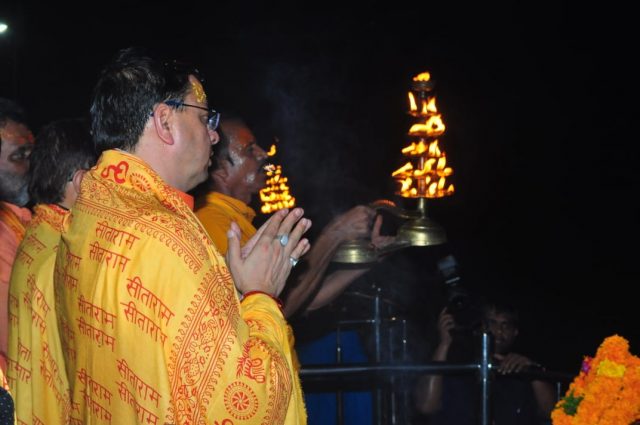 By Our Staff Reporter
Dehradun, 16 Oct: Chief Minister Pushkar Singh Dhami reached Ayodhya today, and offered prayers to Ram Lalla and Lord Hanuman. He prayed for the prosperity of the state of Uttarakhand after visiting Ram Lalla and Hanumangarhi seated in Ram Janmabhoomi. During this, he also witnessed the ongoing construction work at the Shri Ram Janmabhoomi Temple and also sought the blessings of sages there. After the commencement of the Ram Temple construction work, Dhami is the first CM of Uttarakhand to have visited Ayodhya. Dhami is on a 2-day visit to Ayodhya. Dhami reached Naka Airport in Ayodhya this afternoon where he was given a Guard of Honour by the Uttar Pradesh Police. After this, he reached the Yatri Niwas Saryu Hotel in New Ghat and also met the party workers. After walking from Naya Ghat Dhami reached Hanumangarhi, joining the Ram procession going to Hanumangarhi Ram Janmabhoomi. In Hanumangarhi, he had a darshan of Hanuman and he offered prayers with due rituals. The prayers were conducted under the leadership of Mahant Rajudas of Hanumangarhi Peeth. After this he directly reached the Durbar of Ram Lalla. He first offered prayers to Ram Lalla at Ramjanmabhoomi and then undertook a tour of the site to witness the construction of the temple.
Earlier, while interacting with the reporters at Yatri Niwas, Dhami said that he had received higher education from Lucknow. And had visited Ayodhya many times during his student life, but he got the privilege of coming to Ayodhya for the first time as Chief Sevak of Uttarakhand. He said that Uttarakhand was the land of Mahadev, while Uttar Pradesh belonged to Lord Ram. The Chief Minister said that India was developing rapidly under the leadership of Prime Minister Narendra Modi, and the respect of the country had increased in the world. Under his guidance, like Uttar Pradesh, new dimensions of development were being established in Uttarakhand. All the projects including Karnaprayag-Rishikesh Railway Line, Chardham All Weather Road, Kedarnath Reconstruction, Badrinath Beautification Master Plan were being successfully put on the ground. Dhami was accompanied by Rajya Sabha MP, Naresh Bansal and others during his Ayodhya tour.
On Sunday morning, Dhami is scheduled to attend the Bhoomi Pujan program of Dharamshala of Delhi Seva Dham Trust. During this, he will be participating in the yagna. He will meet Mahant Nritya Gopal Das, President of ‘Shri Ram Janmabhoomi Teerth Kshetra Trust’ at Maniram Cantonment. After this, he will leave for Dehradun from Naka Airport in Ayodhya.