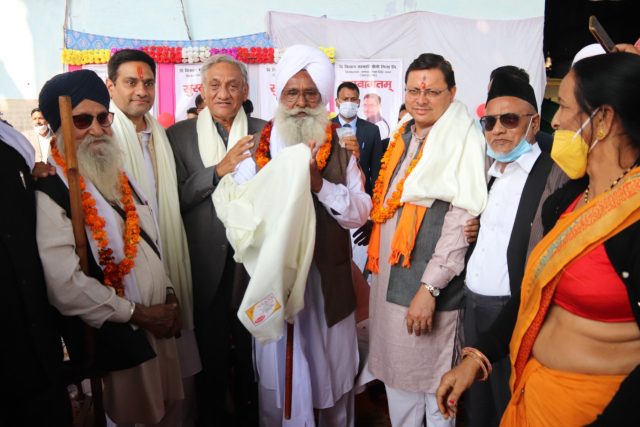 By OUR STAFF REPORTER SITARGANJ/DEHRADUN, 29 Nov: Chief Minister Pushkar Singh Dhami today inaugurated the fresh crushing session at the Kisan Sahakari Chini Mills Ltd. at Sitarganj. He also said that the government had fixed the procurement price of early variety of sugarcane at Rs 355 per quintal and that of the ordinary variety at Rs 345 per quintal. The crushing session of Farmers Co-operative Sugar Mills Ltd., which was closed for a long time in Sitarganj, was duly inaugurated by the Chief Minister Pushkar Singh Dhami by putting sugarcane in the conveyor. Pratak Singh and Tarsem Singh, the sugarcane farmers of Sarkada were honoured on this occasion by making them wear the shawls by the CM. Congratulating the farmers on the occasion, Chief Minister Pushkar Singh Dhami said that today was a historic day for Sitarganj. A new chapter of development was beginning with the commencement of the crushing season of Sitarganj Kisan Sahakari Sugar Mill. In future, electricity and ethanol would also be produced from this sugar mill. He said that the State Government and the Union Government were always working to make the farmers modern and prosperous. The BJP was always with the farmers and would stand with the farmers in future also.The Chief Minister said that Prime Minister Narendra Modi had special concern about Uttarakhand, soon another AIIMS would open in Uttarakhand so that people could get all the medical facilities through the AIIMS. He said that with the cooperation of the Modi Government, approval had been given for Kichha to KhatimaRailway line and Tanakpur to Bageshwar railway line. He also said that the Jamrani dam project had also been approved by the Centre. He said that keeping in view the geographical location, different agricultural schemes were being prepared for the hill and plain farmers. Plans were being made by the state government for every section, every area. A roadmap was being prepared for Uttarakhand to be made the best state in the country by 2025. So far more than 400 decisions had been taken by his government and orders issued already in this respect. He reminded that Asha, Anganwadi, UPNL, Rajya Aandolankaaris, Gram Panchayat, Kshetra Panchayat, District Panchayat, Food Mothers, PRDworkers were beneficiaries of the new decisions. He said demands of those which were still pending would also be met soon. The Chief Minister said that under the new sports policy, all the expenses of such sportspersons who had the ability and potential would be borne by the state government. He told that the children who had become orphans in the epidemic were being given an amount of Rs 3000 per month under Vatsalya Yojana and the cost of education was being met by the state government. Mahalaxmi kits of essential items were being given to mothers of newborn children. Single window system had been started for employment and job fairs were being organised so that the unemployed did not have to wander for employment. People’s suggestions had been sought through public domain to formulate a new mining policy. On this occasion, the Chief Minister also announced to increase the corpus fund of Namo Shudra of Bengali community and the corpus fund of Sant Kesar Singh Scholarship from Rs 2 crores to 4 crores. Sugarcane Development and Sugar Industry Minister Swami Yatheeswaranand said that the State Government had taken a resolution to run this sugar mill which was closed for a long time, that resolution was fulfilled today. He said that the government is with the farmers. He told that the sugarcane farmers of Sitarganj, Nanakmatta and Khatima would be benefited by the opening of this sugar mill. He told that the state government has made the payment of sugarcane on time and it will be done in future also. On this occasion, thanking the Chief Minister Dhami, local MLA Saurabh Bahuguna congratulated the farmers. He said that today was a very auspicious day for Sitarganj, Nanakmatta and Khatima. He said that efforts would be made to make this sugar mill more modern in future. On this occasion, former Chief Minister Vijay Bahuguna said that Chief Minister Dhami took care of the sentiments of the farmers of the area. He said that whatever work was possible was being done. District Magistrate Ranjana Rajguru, SSP Dalip Singh Kunwar, Chief Development Officer Ashish Bhatgai, Additional District Magistrate Jaibharat Singh, GM Sugar Mills RK Seth, Deputy District Magistrate Tushar Saini were among present on this occasion.