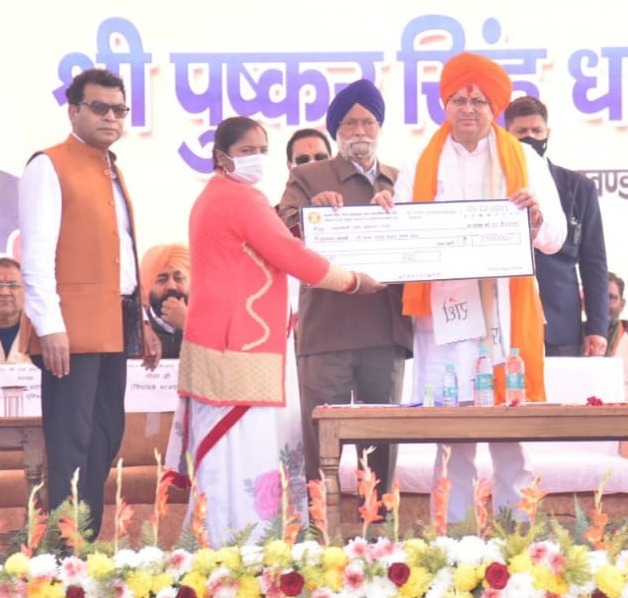 UDHAM SINGH NAGAR, 5 Dec: Chief Minister Pushkar Singh Dhami inaugurated and laid the foundation stone of schemes and projects worth about Rs 11710.50 lakh, after reaching Udayraj Hindu Inter College premises in district Udham Singh Nagar. This includes 11 projects costing Rs 3741.10 lakhs which were inaugurated and 17 schemes and projects costing Rs 7969.4 lakhs for which foundation stones were laid. While addressing the gathering, Chief Minister Pushkar Singh Dhami said that all possible efforts were being made by the state government to take development to every corner of the state. He said that Prime Minister Modi had also said that the next decade would be the decade of Uttarakhand. Dhami said that when the state would be celebrating the silver jubilee of its foundation day, then it would be a leading state and would be an ideal state in all the sectors and fields. Ideas were being taken from intellectuals to make the state excellent and ideal one. Bodhisattva series was being run for the consideration of intellectuals. Uttarakhand will become particularly leading in the fields of education, medicine, industry, horticulture, agriculture, employment etc by 2025. Chief Minister Dhami said that Vikas Yatra or the path to development was not an individual journey but a collective journey. He said that everyone would have to work together to give wings to the young dreams of a young state. He said that the government was working as an ally of the people. He said that the procurement price of Rs 355 had been fixed for early variety of sugarcane and Rs 345 for common variety this season and this was an increase of Rs 29.50 per quintal. The fare had also been reduced from Rs.11 to Rs.9.50. The closed Sitarganj sugar mill had been started while the work was underway to start Kashipur sugar mill soon. Work was being done on a single window system for the end of industrial disputes, so that entrepreneurs did not face trouble. A team had been formed to settle industrial disputes on the basis of one time settlement. Chief Minister Dhami said that a new sports policy has been brought so that talented players do not have to wander due to lack of facilities or worry about food, accommodation and travel to show their ability. Cabinet Minister Swami Yatishwaranand, MLA Harbhajan Singh Cheema, District President BJP Shiv Arora, Ram Mehrotra also addressed the public. Mayor Usha Chaudhary, Chairperson SC Commission Mukesh Kumar, Vice President Women Commission Shayra Bano, former MP Balraj Pasi, former MLA Rajiv Agarwal, Dr Shailendra Mohan Singhal, Chief Development Officer Ashish Bhatgai were amongst those present at the programme.