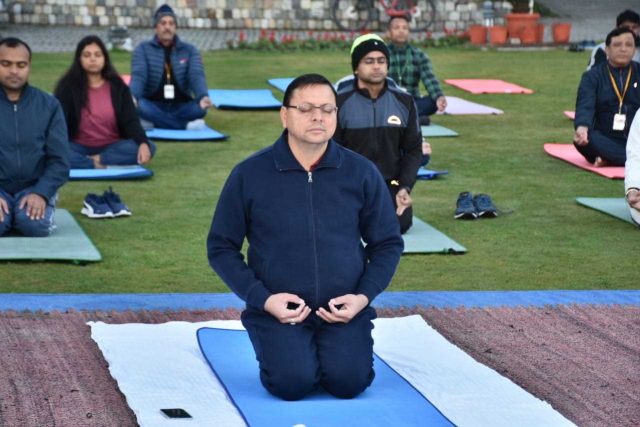 Mussoorie, 24 Nov: The last day of the ‘Chintan Shivir’ at Lal Bahadur Shastri National Academy of Administration (LBSNAA), here, began with a yoga camp led by none other than Chief Minister Pushkar Singh Dhami.

Along with Dhami, Chief Secretary SS Sandhu and all senior officers performed yoga. The Yoga camp was held at the Academy’s Kalindi Ground. On this occasion, various asanas were demonstrated by the yoga instructors, which were then performed by the officers.

Earlier, Chief Minister Pushkar Singh Dhami undertook a morning walk inside the LBSNAA premises before the Chintan Shivir.  During the course of his morning walk, he also went to the gate of the academy and met the ITBP jawans deputed there on security duty and inquired about their well-being. During this, he kept accepting the greetings of the people he met on the way. After this, the Chief Minister also took a round in the academy premises and bowed before the statue of the late Prime Minister, Lal Bahadur Shastri.

Garhwal Post has established itself as a credible, balanced and forward looking newspaper in India. Based in Uttarakhand, the daily is read by the aware, socially and culturally responsible, high-income elite of society.
Contact us: info@garhwalpost.in
widow dating site dates to do near me