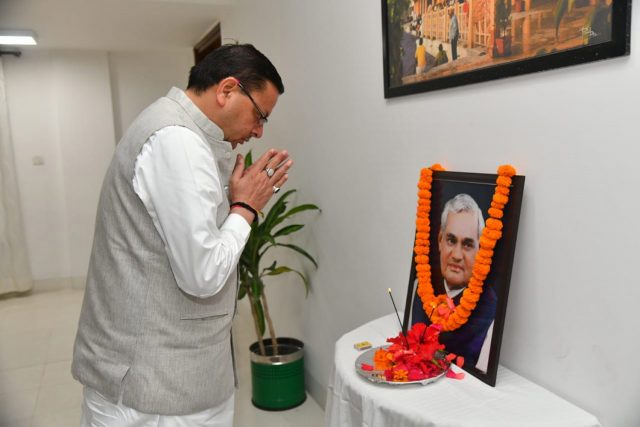 Dehradun, 16 Aug: Floral tributes were paid to former Prime Minister and Bharat Ratna awardee, the late Atal Bihari Vajpayee on his death anniversary at the CM’s Residence and the BJP Headquarters here today. Chief Minister Pushkar Singh Dhami paid tribute to the late leader by garlanding the portrait of Vajpayee at the CM’s residence. The CM said that Vajpayee was a statesman and a great leader not only of India but at the global level. He had a special attachment for Uttarakhand. It was he, as the then Prime Minister, who had approved the formation of Uttarakhand state.

At the same time, State President Mahendra Bhatt also paid tribute to Atal Bihari Vajpayee in a programme organised at the BJP headquarters by garlanding the portrait of Vajpayee.

On this occasion, Bhatt reminded that Atal Bihari Bajpai was called the Ajatshatru of Indian politics as he had the capacity to win over his adversaries too. He was a leader of Indian politics who was proud to call himself a Hindu and spearheaded the philosophy of Hindutva. Bhatt said that Vajpayee was a great leader and poet and such a great orator that his voice still resonated in the ears and hearts of the people of India. Vajpayee could be credited to lead the party in its initial years with such conviction that it had become the largest political organisation in the world at present.