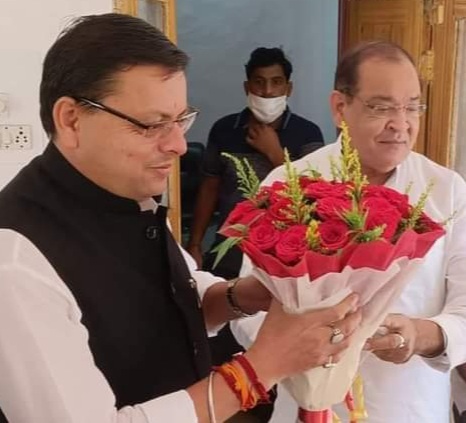 DEHRADUN, 25 Sep: With less than five months to go before the state assembly elections, hectic political activities have started in Uttarakhand. Not only this, rumours and posturing are also doing the rounds. Efforts to poach leaders from other parties too have begun in earnest by all parties. Hence, amid wide speculations that Cabinet Minister Yashpal Arya wasn’t very happy with respect to certain things in the BJP and that he was mulling switching over to Congress once again along with his MLA son Sanjeev Arya, Chief Minister Pushkar Singh Dhami reached the residence of Arya unannounced to have “breakfast” with him. Both the leaders had breakfast together and reportedly discussed several issues including the alleged reasons for Arya’s reported resentment with the party. They spent over an hour together. After coming out, both the leaders denied that Arya had any rift with the party or that there were differences on certain issues.

Chief Minister Dhami reminded that he had known Arya for past 30 years and Arya used to be MLA of the same region thirty years ago from where he (Dhami) is the MLA presently. He said that their relationship was very old and he was a child when Arya was already a known name in politics. He stressed that there were no differences or rift and that he just paid a courtesy visit to Arya. On his part, Arya too claimed that he had come to know from the media only that he had any rift with the BJP leadership. Calling the rift as a figment of imagination and a matter of speculation, he said that he was a committed party worker who would take up any responsibility handed over to him by the party quite seriously and sincerely. It may be recalled that following recent entry of Congress MLA Raj Kumar into the BJP, speculation has also begun that several BJP leaders were also willing to switch over to Congress. Efforts to poach leaders from the other parties are certainly making lot of news these days in Uttarakhand. As per the speculations, certain BJP leaders who had joined the party by switching over from Congress were now sulking and mulling to return to Congress before the elections. This has been claimed by some very senior Congress leaders. On the other hand BJP’s National Media head and Rajya Sabha MP Anil Baluni has recently claimed that Congress leaders were making a beeline at the doors of BJP and the BJP was having a difficult time to accept them as the BJP was nearing houseful situation!