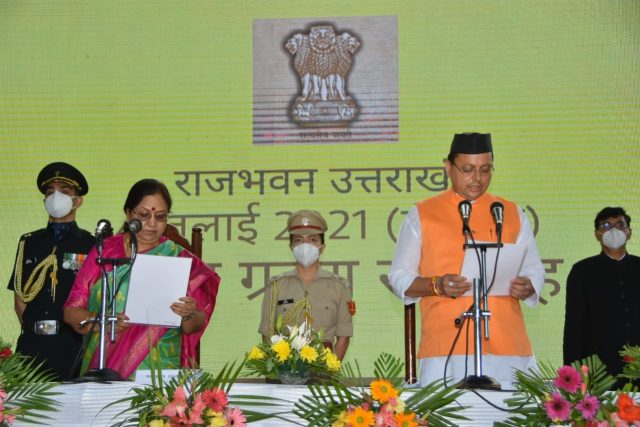 By Arun Pratap Singh
Dehradun, 4 Jul: Khatima MLA Pushkar Singh Dhami has become the youngest Chief Minister of Uttarakhand. Dhami was sworn in as the CM and administered oath of office and secrecy this evening by Governor Baby Rani Maurya at the Raj Bhawan, here.
He is the 11th CM of Uttarakhand. Along with him, his entire Council of Ministers was also sworn in and administered oath of office and secrecy. There is no new face in the government except Dhami, himself, although outgoing ministers of state namely Dhan Singh Rawat, Rekha Arya and Swami Yatishwaranand have now been promoted as cabinet ministers. After the CM, it was the turn of Satpal Maharaj to be sworn in followed by Dr Harak Singh Rawat, Banshidhar Bhagat, Yashpal Arya, Bishan Singh Chufal, Subodh Uniyal, Arvind Pandey, Ganesh Joshi, Dhan Singh Rawat, Rekha Arya and Swami Yatishwaranand to be sworn in as ministers.
On this occasion, Chief Minister Pushkar Singh Dhami while congratulating all the ministers claimed that the state government would work on the basic mantra of ‘Sabka Saath, Sabka Vikas, Sabka Vishwas’ and keep the state on the path of development. It was the commitment of the party and his government to ensure that the benefits of development covered the last mile. Chief Secretary Om Prakash conducted the programme. Legislators, senior officials and other dignitaries were present on the occasion.
The timing of the ceremony was fixed at 5 p.m. today. By about five o’clock all the dignitaries had occupied their designated places, but despite this the swearing-in ceremony was a little delayed and it was at around 5.14 p.m. when the Governor administered the oath of office and secrecy to Pushkar Singh Dhami. It may be recalled that, earlier on Saturday, after being elected the leader of the BJP Legislature Party, Dhami along with party leaders went to the Raj Bhavan and met Governor Baby Rani Maurya and submitted the proposal to form the government.
It is worth noting that it is for the second time within four months there has been a change of leadership in the BJP government of Uttarakhand. Within the same term, Dhami will be the third CM of Uttarakhand. In fact, BJP has ruled the state thrice times since the formation of the state, but none of its chief ministers have been able to complete their terms, so far. In the 21 years of the existence of Uttarakhand as a separate state, ND Tiwari of Congress remains the only CM to have completed a full five year term.
It may further be recalled that at yesterday’s meeting of the BJP Legislative Party held at BJP State Headquarters, the Central observers had proposed the name of young MLA from Khatima, Pushkar Singh Dhami as the party’s choice as next CM. However, some BJP MLAs were learnt to be angry with this decision of the BJP high command particularly due to two reasons. Some of them being senior leaders were themselves contenders to the top political post. Some of the leaders stated to be angry yesterday and this morning are from Congress background, who joined BJP a few years ago. Among these, the names of Satpal Maharaj, Dr Harak Singh Rawat, who were ministers in the Tirath government, were listed as those stated to be angry. In particular, Maharaj was stated to be particularly miffed and was the first to leave the meeting yesterday. However, by the time of the swearing-in, everything was back to normal, at least on the face of it!
The BJP has had to change the Chief Minister for the second time within four months. Dhami has replaced Tirath Singh Rawat, who himself took over as the chief minister four months ago in place of Trivendra Singh Rawat. The reason for the resignation of Tirath Singh has been attributed by the BJP to a constitutional crisis citing provisions under Section 164 and Section 151 of the Representation of People Act. The BJP had claimed that Tirath Singh was required to be elected as an MLA before September to continue as the Chief Minister, but given the fact that special circumstances were prevailing due to Corona and given the fact that less than a year was remaining of the current assembly, it had become necessary to replace Tirath Singh Rawat and he had to go in less than four months’ time.