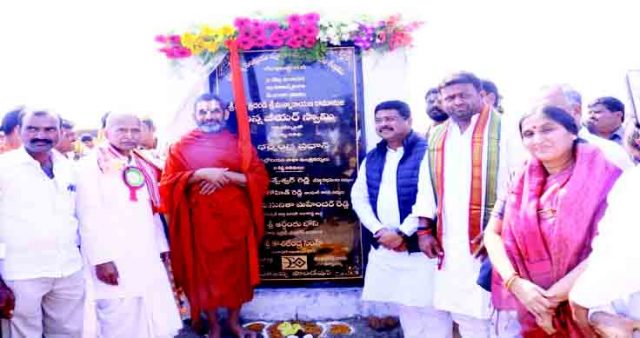 By OUR STAFF REPORTER
DEHRADUN, 23 Dec: ONGC, in collaboration with Eklavya Foundation, has created a Centre for Agriculture Research and Training in Telangana to train farmers in organic farming using the latest technology. Dharmendra Pradhan, Union Minister of Petroleum & Natural Gas and Skill Development and Entrepreneurship, inaugurated the CSR project for construction of hostel, classrooms, computer labs and administrative block at the centre, benefiting more than 3500 farmers in organic farming, yesterday.
The Minister said, “This area is known for toor daal produce, and I dedicate this initiative to my brothers and sisters who are engaged in farming and I hope they will be able to use the facilities created here and understand and adopt modern technology for improving production.”
The Minister championed the cause of skill development of the farmers to promote organic farming in a big way across the country, and said such noble projects would improve the standard of living of the farmers. Pradhan also said that organic farm produce is another area for promoting export of these products with suitable quality controls and market linkages, helping India become a net exporter in organic produce. He said the concept of ‘Jai Jawan, Jai Kisan’ was very close to the heart of this government and it would strive to take the project to the entire nation.
This iconic CSR project, envisioned by the government, has been supported by ONGC to help India develop a sizeable organic farming market. CMD, ONGC, Shashi Shanker said that the company was proud to be associated with this kind of project through its CSR to empower people towards inclusive development. “Technology induction in agriculture to foster organic farming will be a game changer. This project will usher in a beginning in our agri-economy,” he added.
Dr Alka Mittal, Director-HR, ONGC, who was present to steer this iconic project said that through proper skill development and use of technology, the farmers would be able to migrate to organic farming which would have three-fold benefits – the farmers would prosper and the quality of life of their families would improve, their consumers will get healthy agro-products, and there would be environment conservation as well leading to improved ecosystem in which the entire state of Telangana would flourish.
The facility will also reach out to farmers in ONGC operational areas in Andhra Pradesh, training them in organic farming and enrolling them in PGS System, an internationally applicable organic quality assurance system, similar to ISO. The PGS System would certify their farm produce as organic produce and recognise them as export quality internationally.
The project will be immensely beneficial for increasing the scope of organic farming in the entire Telangana and other neighbouring regions. This project will help the farmers and local youth to enhance their livelihood by imparting them employment with enhancing vocation skills. The project is being implemented in one of the most backward areas in the region. It will benefit about 3500 farmers, 200 students and consumers in general by way of promoting organic farming.