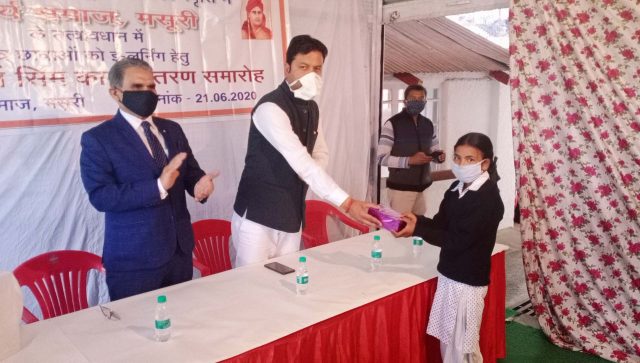 MUSSOORIE, 21 Jun: Mobile phones and SIMs for online classes were presented to 61 students by Siddhartha Luthra, Attorney General of Delhi, in memory of his mother with collaboration with the Arya Samaj School, Mussoorie.
The Chief Guest at the function was organised by the Mussoorie Municipal Chairman Anuj Gupta and School Managing Committee President Narendra Sahni.
Chairman Anuj Gupta thanked Siddharth Luthra for this social work. The students were also pleased to receive the mobile phones and SIMs. They said they could not take advantage of the online classes started during the lockdown because their families did not have the money to buy expensive phones. They said they would now get the benefit of the classes. They said that they felt sad when the children of English-medium schools could attend online classes. Now they were very happy to get the mobile phones.
Narendra Sahni said that 61 students from seven Hindi medium schools were given mobile phones and SIMs. Present on the occasion were Bharat Bhushan, Anand Rastogi, Satish Rauchhela, Sanjay Aggarwal, Nitin Gupta, Pranav Sahani, Reena, Sunita Rauchhela, Anand Rastogi and others.