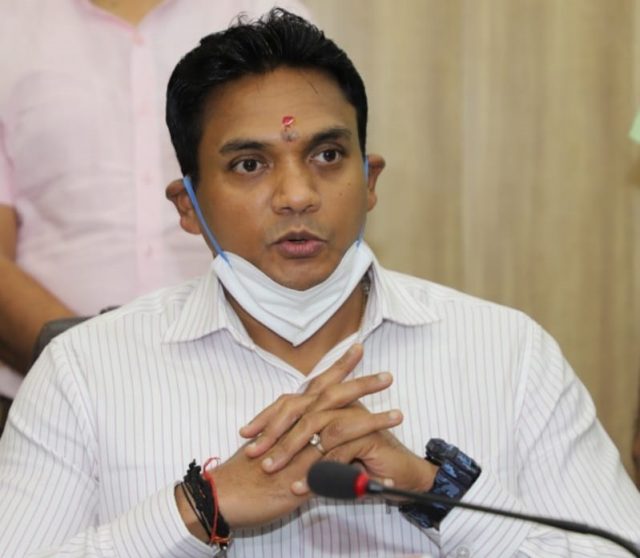 By Our Staff Reporter
Dehradun, 4 Aug: The District Magistrate and newly appointed CEO of Dehradun Smart City Company, Dr R Rajesh Kumar, today, inspected the Smart City works for the first time after assuming charge. During the inspection, he directed the officials to maintain a complaint register at every site to resolve the grievances of the public. He said that wherever the roads were being dug, the levelling should be carried out at the earliest to ensure that public does not face any inconvenience. He also directed that at all sites where the work is underway, warning boards should be installed.
Kumar conducted inspection at various sites where the Smart City project works are underway, including Dilaram Chowk, Behl Chowk down till Secretariat on Rajpur Road, as well as around the Parade Ground. He issued several directions to the officials of the Smart City Project, PWD and other executing agencies towards improving the situation on the ground and the pace of the works. He directed officers of the Smart City Project to submit progress reports on the works underway along with photographs of the work done so far by this evening and also to submit the details and the plan of the work to be done in future.
He also asked the officials to expedite the construction works and complete them with total transparency and without compromising the quality. He asked the engineers of the departments concerned to regularly conduct inspections and ensure quality and time bound progress. He instructed keeping complaint registers at the work sites so that the local people could register their complaints, if any. All complaints needed to be regularly checked, marked and resolved at the earliest. Problems related to water logging due to the works had to be resolved at the earliest, he asserted, noting that rain water was entering several homes on Rajpur Road.
Rajesh Kumar directed that all roads dug up for work be covered up and levelled properly immediately after the completion of work without leaving any pothole so that untoward incidents don’t occur. He directed completion of the works around the Parade Ground before the Independence Day function on 15 August.
He was told by the officials that, at present, work related to the Smart City Project was in progress at 11 sites within Dehradun. During the inspection, the CGM of Smart City Project Ltd Sriram Mishra, Executive Engineer JS Chauhan along with other officers of Smart City Project and related agencies were present.