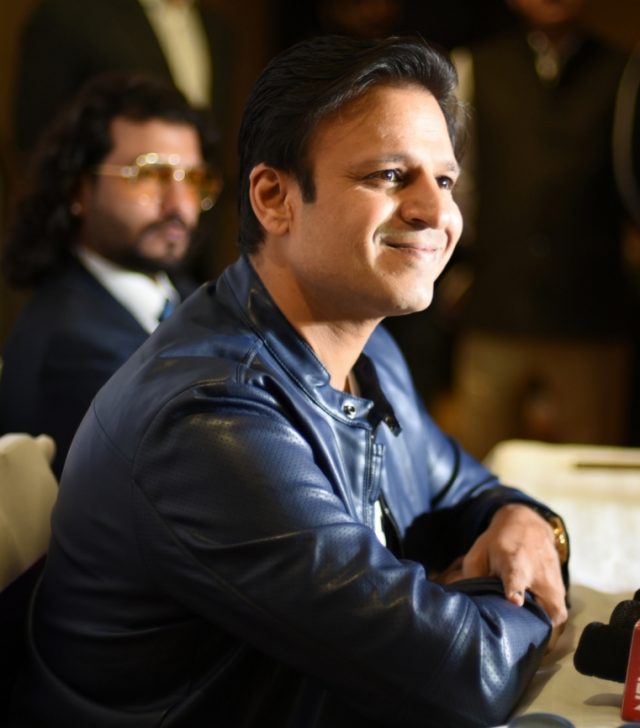 DEHRADUN, 24 Oct: In an extremely inspiring speech delivered by him at the 19th Founder’s Day celebrations at the Aryan School this evening, young and dynamic actor and social activist Vivek Oberoi called upon the youngsters to create their own opportunities rather than waiting for life to bring opportunities to them. “You may not always get perfect opportunities. The best thing to do is to grab every opportunity and make it as perfect as you can. Also, try to create opportunities for yourself. This is how life changes,” he said while sharing many an anecdote of his life and career with the large audience of students, teachers, parents and guests. He said that while he was at a boys’ boarding school, he wanted to be part of a play to be staged there. “I was in Class Eight. The seniors would always take all the best roles. So they asked me to play the role of a girl in the play. I took the opportunity and went to the headmaster to seek permission to go to the girls’ school and observe their behaviour to make my acting genuine and realistic! I was given the permission and thus became the envy of all the boys. I acted so well that I received the gold medal for my performance.” He spoke about the time when he had come back from New York after completing his studies. “My father wanted to launch me in films and Abbas-Mastaan were to write the script. My father wanted to produce the film and launch me. However, I was not comfortable with this and decided to struggle and make it on my own. I kept getting rejected as Vivek Anand, as I had dropped my surname at that time. I went to Ram Gopal Varma, who was casting for his film “Company”. He said I looked too refined and sophisticated for the role he had in mind – that of a rough and tough slum-dweller. I asked him to give me two weeks. I went and rented a ‘kholi’ and began staying in the slum area, living their life for two weeks. When I met Varma with my changed look, he marveled at it and said he had never seen such a unique audition! And the role of Chandu Nagre was mine!” Vivek urged the students to always believe in themselves. “When anyone tells you that you will not be able to do it or that you are not good enough, do not believe that person. I never believed anyone who said I was no good.” He said he was sharing this “pragmatic” experience from his life that would be useful to students once they went into the “world outside”, which was a very different world from that of a school. “These years in school are wonder years. So, enjoy them to the full while you are here.” Oberoi said that, although, he had won many national and international awards, his biggest award was the happiness and confidence he saw in the three thousand underprivileged girls who are now studying and excelling through his project, “Devi”. “If you can help people, you must do that. Consider yourself blessed if you are in a position to help others.” Vivek said that Indian culture and civilisation were the best in the world and the importance of education and “sanskaras” in it was crucial. Earlier, Guest of Honour Mukesh Tyagi, an actor and motivational speaker, said that although formal education was very important, there were many successful people who had not done well in studies or had not got an opportunity to study. He said that India was the youngest country in the world owing to its demographic dividend. “If the youth power is channelised in the right manner, it can make our nation stronger. However, if it is not, then it will become a demographic disaster!” He said that students must always show intellectual curiosity and there should be a dialogue between the teacher and the taught. “A teacher should be a life-long learner and must not make it an issue of ego if he or she is asked something to which he or she has no answer. Ego can become a great barrier in this much-needed dialogue.” He paid tribute to the memory of Sunny Gupta and said it was his vision for the school that had brought it to this landmark occasion in its progress.