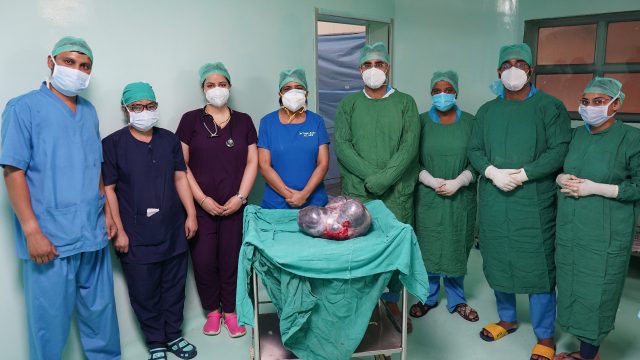 By Our Staff Reporter
Dehradun, 28 May: A Senior Cancer Surgeon of Shri Mahant Indiresh Hospital and his team removed a large tumor weighing eight and half kilograms from the stomach of a fifty year old woman who is a resident of Muzzaffarnagar.
The surgery lasted two and a half hours. She has recovered well after the surgery. She visited many hospitals prior to coming to Shri Mahant Indiresh Hospital for her treatment. She came to the hospital with complaints of abdominal distension, and inability to eat for last two years. She was admitted to the hospital on 26 May. After investigations, she was found to have a large ovarian mass which was occupying almost the whole of the abdomen, compressing the intestine. In medical terms, this condition is called Ovarian Cystadenoma.
She was operated on today under the supervision of Dr Pankaj Kumar Garg, and a large ovarian tumour weighing 8.5 kilograms was removed.
In general, ovarian cystadenoma is commonly found in women of middle age. Usually they are of small size and do not weigh more than 500 gms. However, if the women do not seek medical treatment in time, these tumors continue to increase in size and may attain huge proportions. Fortunately, this patient was successfully operated on in time. In this case, if she had not undergone surgery in time, it might have caused the tumor to rupture and spill tumor cells into the abdominal cavity.
During the surgery, Dr Rubina Makkar and Dr Vandana from the anaesthesia team, Dr Sanal from Surgical Oncology team, and Amit and Pooja from nursing team played a significant role in the successful surgery.
Said Dr Pankaj Kumar Garg, “It is disheartening to see that, even in the 21st century, patients still seek treatment only in advanced stages of the disease. The lady had the progressive distension of the abdomen for two years and neglected it. It must be highlighted that most of the tumors, if detected early, can be completely cured. Any woman who has excessive bleeding, abdominal distension, feeling of mass, or any other abnormal symptom must consult the doctor immediately for early diagnosis and treatment. Carelessness or delay in seeking the treatment can prove disastrous and fatal at times.”