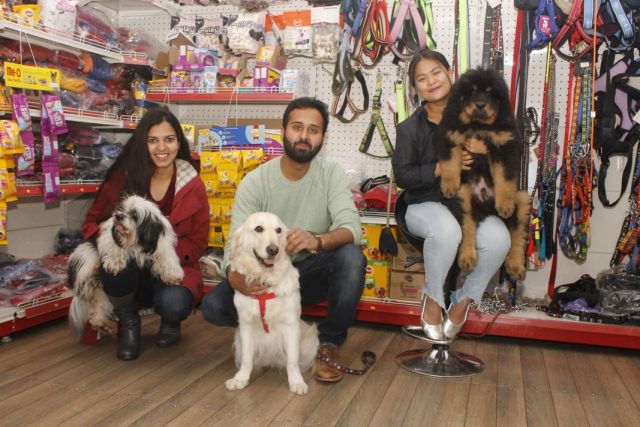 “Allow a stray to steal your heart”

DEHRADUN, 14 Mar: For Ishan Chopra his dream initiative ‘Wisdom Pet Kingdom’, started a couple of years ago is his life’s mission. Though he began his career with HCL as a Junior Engineer and later joined Fidelity Information Service at Delhi, his heart was elsewhere. Also he wished to live a life of peace and tranquility in his home town Doon rather than live of life of misery in a bursting and insensitive metro. He decided to conjoin his love for animals with his entrepreneurial skills and soon decided to dedicate his endeavors to animal welfare. “I slowly developed a keen interest in pets as my two cousins were successfully running  pet businesses in South Delhi. Whenever I got time I visited my cousin’s store and trained under them, he reveals. “Later I decided to open a store with the same concept in my hometown, he adds. “I know that there are many pet lovers in the city and hundreds of residents  keep on keeping pets.

Also I realized that most of the time there was lack of awareness among the people on issues relating to pets,” he further shares. People were not aware “WHY GROOMING IS INPORTANT”. Ishan decided to update them. Since last two years he is educating his clients and encouraging them to keep their pets healthy and well groomed. “As a service it’s a one stop solution for our customers that we are offering. We provide clinical service, grooming service, dog hostel (for those planning a vacation). We will take care of pets in a very clean and hygienic environment. Dog food, accessories, clothes, emergency clinical service and much more is on offer,” he informs. Dogs make our life whole, Ishan believes. “They give us unconditional love and are best companions for children. They are the only creatures on earth that love you more than they love themselves. They trust us completely and that’s why we should make sure we never betray their trust. Dogs have a lot of integrity which often times in found to be lacking in humans I must say.” Ishan sends out an appeal to Doonites to treat stray dogs with compassion. He quotes Mahatma Gandhi to drive home his point. “Gandhiji had said that the greatness of a nation can be judged by the way its animals are treated. I urge people to be kind to strays. We at our clinic offer free grooming to strays adopted by people. Please love them and offer them space in your homes,” he underlines. Allow a stray to steal your heart, pleads Ishan.