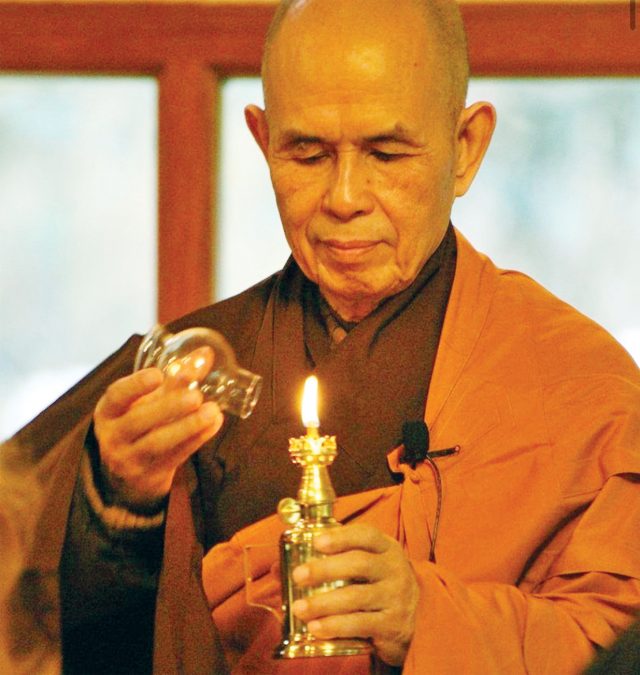 DEHRADUN, 22 Jan: Doon Buddhist Committee made an offering of 108 lamps dedicated to the great dhamma teacher, Thich Nh?t H?nh, who passed away peacefully at the 95 years amid his disciples today, after living a long exemplary life, inspiring countless beings in making their life happy and meaningful. Th?y (master), as endearingly known to all was among the most revered Buddhist teachers in the world. In a press statement issued by Tenzin Luding of Doon Buddhist Committee, Th?y introduced the term ‘Engaged Buddhism’ in the modern world which broadly speaking means applying insights of Buddha dhamma into our daily life social, environmental, economic, political, etc. – to make the transformation towards true peace and happiness. 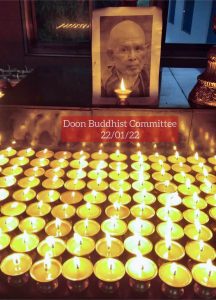 As a poet and author, Th?y wrote more than 100 books published in over 40 languages written in a simple style, making dhamma easily accessible to a commoner and all. His classical book ‘Old Path, White Cloud’ derived from 24 Pali, Sanskrit, and Chinese sources is among the most popular book translated into multiple languages. They promoted a plant based diet as a means of nonviolence towards animals. May the light of wisdom dispel the ignorance and lead all to the path of enlightenment. May the great dhamma master be born again soon for the benefit of countless beings. Om mane padme hung!

Thich Nhat Hanh attracted national attention in India during his historic visit in 2008 as he encouraged efforts to re-establish Buddhism and bring mindfulness into the mainstream. The Indian Government recognised Thich Nhat Hanh as a global peace icon, author, poet, and international statesman and invited him as a guest of the State, to deliver the Gandhi Memorial Lecture and to address Parliamentarians. The theme of his address was ‘How to lead with courage and compassion’. He had met with K R Narayanan at an earlier visit in 1997 and motivated him in the setting up of the Ethics Committee of Parliamentarians. Inspired by Thich Nhat Hanh, Ahimsa Trust was set up in 1996 to represent him and his community in India. It has been involved in bringing Mindfulness and Applied Ethics to many facets of society, be it educators, children and parents, scholars, the police including the CRPF, politicians, business leaders, doctors, the media, Dalits, women, Shakyas, Government officials and so on. Thich Nhat Hanh’s message of peace, happiness and mindfulness is being spread by Dharmacharya Shantum Seth and the Ahimsa community in India To further this work, Ahimsa Trust is setting up Jamun Village, a Mindfulness Practice Centre, in the village of Rajpur near Dehradun in Uttarakhand. The land has been donated and is being developed as an educational, spiritual, and socio-ecological centre, a place of refuge, training, and compassionate action. The land was blessed by Thich Nhat Hanh on his last visit to India and he called it ‘Plum Village, India’. His practice centres, home to over seven hundred monks and nuns, represent the fastest-growing Buddhist monastic order in the West, and receive tens of thousands of visitors every year. Thich Nhat Hanh’s monastic and lay followers continue to apply his teachings on mindfulness, peace-making, and compassionate dialog, in schools, workplaces, businesses, and prisons. Thich Nhat Hanh’s latest book, Zen and the Art of Saving the Planet, was published by HarperCollins in October 2021.

HUE (VIETNAM), 22 Jan: Zen Master Thich Nhat Hanh, one of the world’s most influential spiritual leaders and pioneer of the modern mindfulness movement, has died at 01:30hrs on January 22nd, 2022, at the age of 95. He passed away peacefully at T? Hi?u Pagoda in Hu?, Vietnam, the same monastery where he was ordained as a monk 80 years ago. A prolific author and poet, Thich Nhat Hanh has written over one hundred books, translated into over 40 languages. Over five million have sold in the U.S. alone. Bestselling titles include The Miracle of Mindfulness, Peace is Every Step, Anger, and How to Love. Often called “the father of  mindfulness” who sowed the seeds of the mindfulness revolution, Thich Nhat Hanh taught many of today’s leading mindfulness teachers, and developed healing methodologies that are incorporated into mainstream clinical psychology to treat depression, anxiety, and stress. Thich Nhat Hanh has influenced leaders in the fields of politics, business, social justice, and environmental action. He has spoken at the US Congress, the UK Parliament, the Indian Parliamentarians, and the Northern Ireland Assembly. The tech billionaire Marc Benioff, the former president of the World Bank, Jim Kim, and the architect of the Paris Climate Agreement, Christiana Figueres, have credited his teachings with giving them strength and inspiration. Walk With Me, the documentary about his life narrated by Benedict Cumberbatch was released in 2017 and sold out in cinemas across Europe. Thich Nhat Hanh first came to international  prominence in 1966, when he arrived in the West to call for an end to the Vietnam War. He befriended Dr. Martin Luther King, Jr., and played a pivotal role in the decision of the civil rights leader to speak out against the war. In 1967, Dr. King nominated Thich Nhat Hanh for the Nobel Peace Prize calling him, “an apostle of peace and nonviolence.” Thich Nhat Hanh was exiled from Vietnam for 39 years because of his peace work and returned only in 2018 to spend his last days in his root temple. His work is continued by the International Plum Village Community of Engaged Buddhism which he founded: a global grassroots network comprising more than 1,000 local mindfulness groups, dozens of meditation centers, and ten monasteries in the U.S., Europe, and Asia.

Garhwal Post has established itself as a credible, balanced and forward looking newspaper in India. Based in Uttarakhand, the daily is read by the aware, socially and culturally responsible, high-income elite of society.
Contact us: info@garhwalpost.in
persian women dating https://garhwalpost.in/dominican-dating-app/