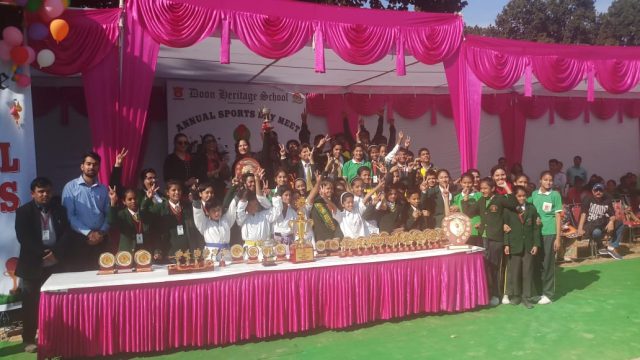 DEHRADUN, 4 Dec: Doon Heritage School, Bhauwala, celebrated its Third Annual Sports Day and Prize Distribution Ceremony, recently. The event began with the distribution of prizes for the curricular and co-curricular activities of each class for the year 2018, and the Scholars’ Award for the year 2017-18.
The annual sports were afterwards declared open by the Principal, Meenakshi Soti, in the presence of guests Dr Rakesh Kala, MD, Will Field School, Kislaya Nautiyal, MD, Holy Ganges Public School, and Dr Sundriyal, Principal, Rajiv Gandhi Navodaya Vidyalaya, Raipur, by releasing balloons into the sky.
The student performed various forms of PT, martial arts, aerobics, yoga postures that won everyone’s hearts. This was followed by the races in the junior and senior categories.
The Best House Trophy was won by Chandragupta House, while the Best Masters March Past Trophy was won by Shivaji House. The Best Class Trophy was won by class II, Daffodil, in the junior section and by class 9, Newton, in the senior section. The Best Student Award was won by Methili Rana and Nawang. Best Sportsperson Award was won by Sonali and Adarsh Chhetri.

Garhwal Post has established itself as a credible, balanced and forward looking newspaper in India. Based in Uttarakhand, the daily is read by the aware, socially and culturally responsible, high-income elite of society.
Contact us: info@garhwalpost.in
free hook up calgary best dating app for 40 year olds