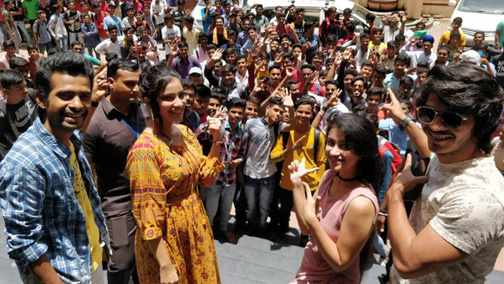 Dehradun, 5 Jul: Doon based Producer and Founder, Purple Bull Entertainment, Om Prakash Bhatt’s Marathi film, ‘Takatak’, has been released to much appreciation. The movie is already a blockbuster and has collected Rs 3.08 crores in the first 3 days, which is the highest opening in Marathi cinema. The film has been shown on 450 screens with over 6000 shows. The movie was released on 28 June all over India. Directed by Milind Kavde, ‘Takatak’ is the first ever adult comedy in Marathi. It features Ritika Shrotri, Pranali Bhalerao and Prathamesh Parab in the lead roles. Talking about the response to the film, Bhatt said, “I am really happy to see the response that we are getting from the audience. The youth are appreciating the movie because it is bold and has out of the box content.” Giving an overview of the film, he added, “After watching the movie, the youth will realise what is happening around them. It is a complete family package consisting of all entertainment elements.” The film has been produced by Purple Bull Entertainment in association with V Patke Films and Gaonwala Creation. Bhatt had earlier received fame with the success of his Marathi movie, ‘Ye re ye re paisa’. He has to his credit shows and movies such as ‘Crime Patrol’ and ‘Milan Talkies’.