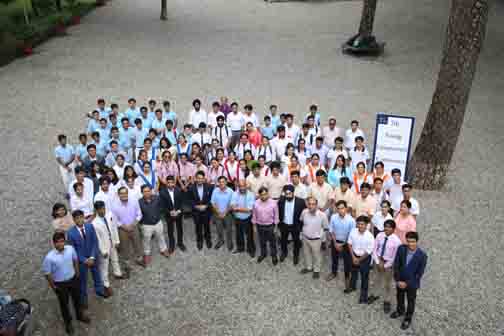 Dehradun, 4 Aug: The Business Club of The Doon School hosted its 7th Young Entrepreneurs’ Conference on Saturday. A total of thirteen teams comprising 52 students participated in the conference. These included outstation schools like Mayo Boys’, Jayshree Periwal, Jaipur, Nivesh Siksha Surat, DPS, Jalandhar, Strawberry Field, Chandigarh, Neerja Mode, Jaipur, St James’ Academy, Kolkata, and local ones like Welham Boys’, Welham Girls’, Hopetown, Vantage Hall and Unison World School.
The conference had three activities: Client Assessment, Mock Stock and Sustainable Business.
In Client Assessment, teams were allocated tasks surrounding a client’s portfolio. The client in this case was Neta App (started by an ex-Dosco Pratham Mittal) and the problem in hand was the ways of sustaining the app in the wake of increasing HR and Server Maintenance costs. Teams were expected to research their clients and come up with ideas that not only provided the best and most practical solutions but are also most suitable to the client. Gurdarshan Kochar, who is the CEO of the App, appreciated a number of ideas and took back a few of them for further discussion with the Board of Governors. Nivesh Siksha was adjudged the winner of the event and The Doon School represented by Sudhir Chowdury, Bhai Kabeer Singh, Arnav D Jain and Kabir Subbiah was the runner-up. This event was conducted by Karthik Subbiah.
The Mock-Stock was a manually operated simulated stock market, in simpler words, where “brokers” would sit in the designated areas during the trading sessions. During trading hours, participants could trade stocks. These brokers would then record the data in a Google Sheets file (an excel sheet which is synchronised between the 4 brokers) and take the “money” as payment from the team investing. The event had four trading rounds with three press releases in between. Teams were adjudged on the basis of the value of their portfolio and their strategies. The event was judged by Harsh Goela and Aditya Goela, who are co-founders of Goela School of Finance and Tedex speakers. Jaishree Periwal International School stood runners-up in the competition, while Nivesh Siksha won the event. The event was led by Vansh Gupta.
Sustainable Business was designed as a commission mandated to develop the town of Sivakasi. Its main industries are the firecracker, matchbox, and printing industries. However, a Supreme Court verdict in October last year ordered firecracker producers to produce only ‘green’ or low emission firecrackers. Due to this, Sivakasi’s economy has taken a major blow. The role of the commission was to stimulate the economy of Sivakasi without adversely impact social groups, public health, or the environment. Sivakasi is in Virudhunagar district, Tamil Nadu. Till last year, it produced roughly 70% of the firecrackers and matchsticks made in India. Due to the SC verdict that is aimed at improving public health by reducing the pollution caused by firecrackers, many companies and factories have closed down. The event was led by Karthik Subbaiha, while The Doon School stood joint runner up in the event with Jaishree Periwal International while Delegates of Strawberry Field won the competition.
In the concluding ceremony, the Boys in Charge of the event, Shreays Banka and Head of the Organising Committee, Naman Kejriwal, proposed the vote of thanks. The event was won by Nivesh Siksha. Prizes were awarded by the Deputy Head of Academics of The Doon School, Debashish Chatterjee, while the Deputy Head, Kamal Ahuja felicitated the judges of the event. Student leader Vansh brought out the need for emotional intelligence in entrepreneurship while stressing the need for ethical leadership. This is an annual event put up by the Department of Accounts, Commerce and Economics, headed by Dr Praveen Dewedi. Master in Charge of the Business Club Samik Das said he is passionate about creating an ecosystem which allows development of creativity, collaboration and integration of ideologies learnt from economics and business lessons along with real life world in ethical perspective though such conferences, according to Piyush Malaviya, Director, Public Affairs, The Doon School.