By Our Staff Reporter
Dehradun, 19 Oct: The Doon School celebrated its 85th Founder’s Day on 17 October. It was the first virtual Founder’s Day of the School. The main Founder’s Day event kicked off with the Founder’s Day Speeches and Programme. There was a live telecast of the programme from the School on its Social Media platforms. 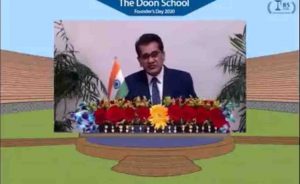 The Chief Guest on the occasion was Amitabh Kant, CEO of NITI Aayog. His key message was on the importance of patience, perseverance, and fearlessness to achieve success in life. He spoke about how all must embrace the current situation as reality and convert adversity into opportunity. He also said that people are in the midst of a technology revolution that will radically alter the way they live in this world and that innovation is being witnessed in areas of big data, machine learning, and artificial intelligence, 3D printing and blockchain, and these are reshaping the world. In his message to the students, who are the budding young leaders, he said that true leaders need to be optimistic, future looking with ambitious goals, and keeping sustainability at the forefront. He also shared his own experiences over the years as a public servant and spoke about his own school days. 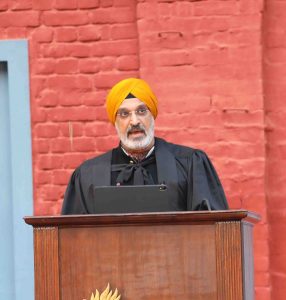 Headmaster Dr Jagpreet Singh was the master of ceremonies. In his message, he spoke about the importance of self discipline. He also spoke about how the school had seamlessly continued to function on an online platform since 23 March.
Sunil Kant Munjal, Chairman, Board of Governors, Indian Public Schools Society, in his message spoke about the reopening of the school in a phase-wise manner for classes 10 and 12 from 29 November. He mentioned all the safety protocols that the School has put in place in order to prepare for the return of students. The Vote of Thanks was delivered by the School Captain, Ajaypratap Singh Grewal. He spoke about his journey in school and that of his batchmates. He expressed his gratitude to all members of the staff for the care and nurturing that they provide. 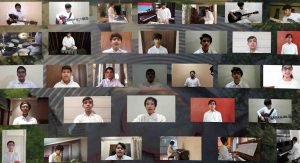 The Headmaster and the School Captain delivered their speeches from the Rosebowl (which is the School’s amphitheatre), where it was live-streamed. This was followed by the telecast of a recording compiled by the Music Department consisting of a performance by the choir and orchestra. The programme concluded with a video recording of the exhibition put up by students from the previous day.
The students of the School Orchestra and Choir under the guidance of the Music Department presented a scintillating programme titled ‘Inure’. The programme was a compilation of three performances – Vandana Trayee Strotras by Pt Ravi Shankar, Raga Tilak Kamod and Raag Bihari by Ustad Amjad Ali Khan, and Michael Jackson’s ‘Heal the World.’ The students prepared videos of their individual vocal and instrumental performances at their respective locations which were stitched professionally into a seamless video that was streamed on the School’s social media platforms.
On 16 October, the school live streamed other events that are a part of its Founder’s Day, every year, like the Chandbagh debates and exhibitions. This was followed by streaming the video recording of the inauguration of a smart classroom by the Headmaster. The topic for the debate was, “This house believes that teachers contribute more to a student’s success than parents”, and the debate took place between the Class of 1995 and the present school debating team. It was won by the latter. The look and feel of the usual platform was much more enhanced. Live events like the Chandbagh debates in which participants debated on an online platform in real time were also streamed on the School’s Youtube channel and Facebook page.
Similarly the inauguration by the Headmaster of exhibitions was captured live and integrated with exhibition videos of students from Art, Accounts, Commerce, Economics and Photography departments. This was done with the help of a Dehradun based creative team of enthusiastic youngsters who helped the School deliver a more visually appealing experience.
The videos of the events can be found on School’s YouTube and Facebook pages.