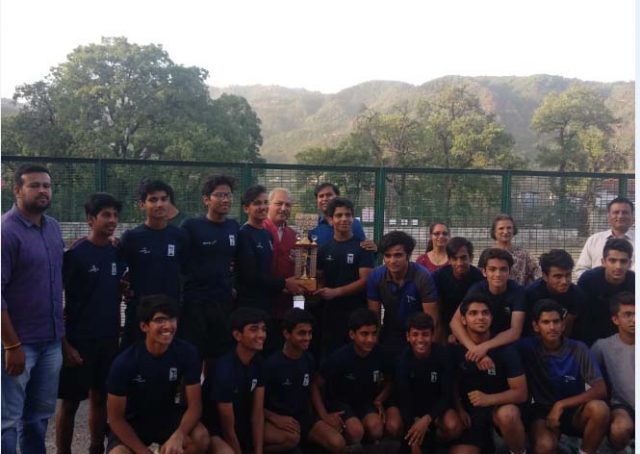 Mussoorie, 29 Apr: The grand finale of the XXth DM Swing Memorial Inter School Hockey Tournament was played between Oak Grove School and The Doon School, Dehradun, at the Oak Grove School ground, yesterday. The final match was inaugurated jointly by Colonel Sunny Bakshi, an ex-Oakgrovian, and Jai Prakash Pandey, Principal, Oak Grove School.
The Doon School team lifted the trophy by defeating Oak Grove, 2-0. For The Doon School, the first goal of the match was hit by Ajay Pratap Singh Grewal in the 4th minute of the match. The second goal was scored by Varad Singh Mann in the 60th minute of the match.
The Trophy for the Best Player of the Tournament was awarded to Ajay Pratap Singh Grewal of The Doon School. The Trophy for the Best Goal Keeper was given to Dhirendra Kumar of Oak Grove School. The Most Promising Player of the Tournament was Devashish Kumar of Oak Grove School.
The Chief Guest, Colonel Sunny Bakshi, and Jai Prakash Pandey awarded the Trophy to the winning team. Colonel Bakshi appreciated the efforts of the school in organising such a tournament. Jai Prakash Pandey said that the children still had a passion for hockey as in the past. He added that the main aim of organising the tournament was to promote hockey and to provide a platform to the players. He also congratulated all the members of the winning team.
The national level Railway Referees of the matches were Vijay Kishore, Shrish Bisen, Omprakash, Gaurav Bhardwaj and Rajneesh Pandey. Gaurav Bhardwaj has been an International Hockey player for the Northern Railway. The final was witnessed by Sanju Pandey, Rekha Sangal, Head Mistress, Oak Grove Senior Girls’ School, Anand Kumar, Head Master, Oak Grove Junior School, Dr Atul Kumar Saxena, Anupam Singh, Vipul Rawat, Diwankar Sarohi, Shadab Alam and Abhishek Rawat.