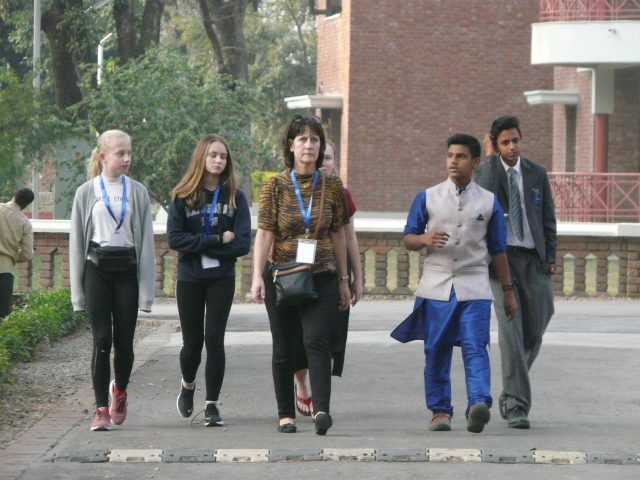 DEHRADUN, 5 Dec: The Doon School is hosting the Regional Round Square Conference 2018, with the theme “Inspire to Serve, Empower to Lead” from 4 to 7 December. Over 150 delegates from 22 schools are participating in the conference from India and abroad. The purpose of this conference is to impart a holistic approach towards internationalism, cultural immersion, environmentalism, adventure, social service, leadership and democracy.
On the first day after the registration, a guided tour of The Doon School was given to the participants, followed by an ice-breaking session to eliminate the tension between the participants and to break the “gender barrier”.
The students were awakened early for a re-invigorating bird-watching/yoga session.
The opening ceremony began with lighting of the ceremonial lamp by Chief Guest Dr Harshvanti Bisht, along with the Deputy Headmaster, Deputy Head of Academics, Director of Social Services and Activities and Young Round Square Representative. Before the formal proceedings of the Conference began, one of the most noteworthy cultural dance performances of Uttarakhand, Chholiya Dance was performed. This was followed by a classical dance performance themed “Mahishasura Mardini” by Purkul Youth Development Society. A musical performance by two Doon School students on the piano and vocals was also presented.
The first keynote speaker (and Arjun Award recipient) Dr Harshwanti Bisht described how the mountains were hundreds of years ago, compared to now. She spoke of the peaks and the various flora and fauna in the Himalayan region. She talked about the glaring environmentalism issues, the initiatives she had undertaken – like growing the saplings, opening a nursery in the Himalayas, and cleaning up the environmental footprints. The last point she made was, “We need to give back more than we have taken.”
As an offshoot of her presentation, there was the Baraza Session, in which all student delegates held a group discussion, mainly on the keynote speaker’s address. The Baraza Speakers elaborated on what she had said, talking about the pressing need for humans to understand problems they face as a species. The Baraza Speakers also talked about various leadership qualities – The art of Delegation, Being a torchbearer, etc.
There was also a workshop on the variety of teaching approaches by Stuart Walls from Tasmania, Australia, for the teacher delegates. After this, students were invited to the Headmaster’s Dinner followed by an eventful jam session.