DEHRADUN, 8 Aug: The Dehradun Private Schools Association Senior Boys Football Tournament 2019 commenced today and Vice Principal Bro Binoi Luckose inaugurated the tournament at St Joseph’s Academy grounds, here, today. A total of 21 schools affiliated to CISCE, New Delhi, are participating in the Tournament, which will be played over a period of ten days. The final will be played on 19 August at SJA. The first match, today, was between Shri Ram Centennial School (SRCS) and Sunrise Academy (SRA). SRCS won by 6-0. The goal scorers were Varsham Jain (3), Ishaan, Ayush Bhandari and Akash. In the second match, The Doon School (TDS) beat North Point Children Academy (NPCA). The match was a draw, 1-1. The goal scorer for TDS was Arshagra, while that for NPCA was Sahyog. In the third match, Moravian institute (MIS) beat Cambrian hall school (CHS), 3- 0. The goal scorers were Powjuan Kamei (2) and Emevald. The fourth match was between Carman School (Dalanwala) and Marshall School. MS won by 3-0. The goal scorers were Gaurav Bhatt, Sarthak Gupta and Rahil Sajw 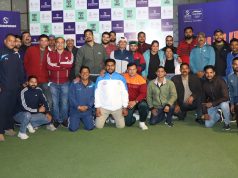