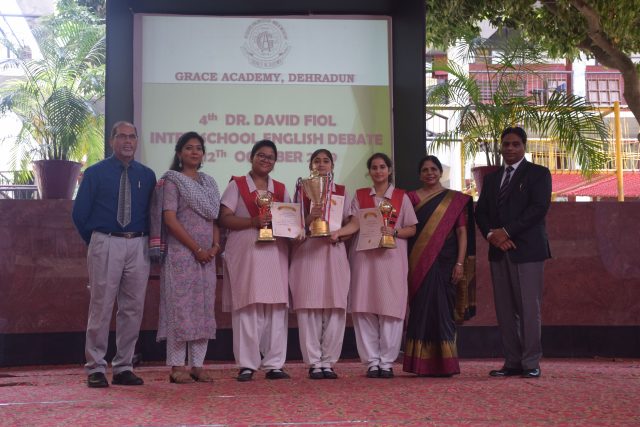 DEHRADUN, 12 Oct: Grace Academy organised it’s 4th Dr. David G. Fiol Inter School English Debate on 12th October. The school holds this debate in honour of its founding principal, Dr. David George Fiol under whose able leadership and vision, the school has carved a niche for itself.
In addition to the host team, participants from Convent of Jesus and Mary, The Asian School, Purkul Youth Development Society Learning Academy and St. Joseph’s Academy displayed their debating prowess. The eminent panel of judges comprised of Judy Chacko, Joyeeta Mukherjee and Priya Chauhan.
The debates were conducted in two rounds namely Turncoat and Modified Cambridge formats, respectively. All teams gave their very best to persuade the judges and the audiencewith their clever arguments andcrisp rebuttals. The winning team was Convent of Jesus & Mary followed by St. Joseph’s Academy as the runner up.
The best speaker for round 1 was Winifred Chopra (Grace Academy) whereas promising speakers for round 1 were Saksham Goyal (St. Joseph’s Academy) & Arushi Bhatt (Convent of Jesus & Mary). In round 2 Saksham Goyal bagged the best speaker’s trophy and Monal Bharti (Convent of Jesus & Mary) was adjudged the promising speaker. Grace Academy also presented mellifluous renditions delighted one and all. The audience was enthralled and enriched by the persuasive speeches by all the participants and they are looking forward to next year’s debate with added fervour.