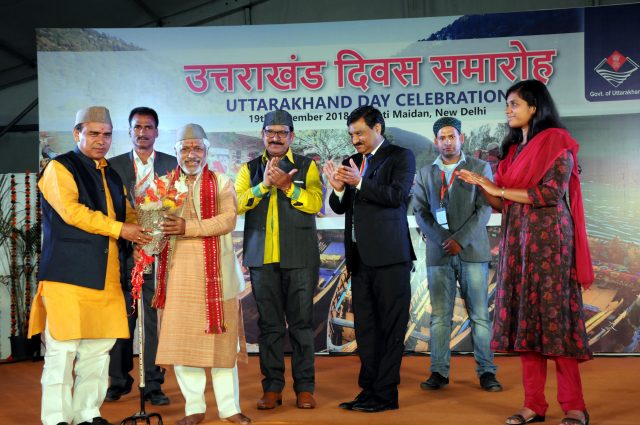 Dehradun, 19 Nov: Minister of State for Cooperatives, Higher Education, Milk Development and Protocol (Independent Charge) Dr Dhan Singh Rawat was the Chief Guest at the ‘Uttarakhand Day’ during the ongoing 38th International Trade Fair underway at Pragati Maidan in New Delhi on Monday. Artists from Uttarakhand presented various cultural programmes at Vatika Lane on the occasion. The visitors from different states had a chance to evaluate the special cultural aspects of Uttarakhand through these renderings.

Speaking on the occasion, Dr Dhan Singh Rawat congratulated the people of Uttarakhand and said that the state, which has completed 18 years of its existence, had achieved development in various spheres. The state had done excellent work in education, health, tourism and horticulture.

He expressed pride in the cultural heritage. He recalled that the President, Prime Minister and other central leaders had visited Uttarakhand, which had given the message of a safe Uttarakhand to the tourists. Dr Rawat said there was great potential for investment in the fields of horticulture and tourism in the state. To boost tourism, 13 new destinations in 13 districts were being developed and work on the All Weather Road was going on at a fast pace. The state government was providing uninterrupted power supply for 24 hours a day and each village was connected by road.

He requested migrant residents of Uttarakhand to visit their villages 2-3 times a year. Dr Rawat said that the state government had adopted a zero tolerance policy on corruption. While expressing gratitude to Chief Minister Trivendra Singh Rawat, he said that the state successfully organised the Uttarakhand Summit-2018, at which MoUs of more than Rs 1,20,000 crores were inked, which would provide employment to 1 lakh youth.

“Rural Industry in India” is the theme for this year’s Trade Fair. In the fair, Afghanistan is the partner country, Nepal, the focus country, and Jharkhand, the focus state. According to the theme, “Rural Industry in India”, presentations on the development of Uttarakhand have been made, along with information about the policies and programmes of the state government, state’s handloom and handicrafts, while the products of agricultural and horticultural sectors of the state have been displayed. The Departments of Industry, Tourism, Horticulture and Food Processing, Handloom and Handicraft Development Council have set up their stalls. The highlight of the tourism department’s stall is a replica of the Kedarnath Temple. Information about the Winter Char Dham Yatra, International Yoga Festival, PATA Adventure Mart and Adventure Tourism is being provided at the stalls of the Tourism Department.