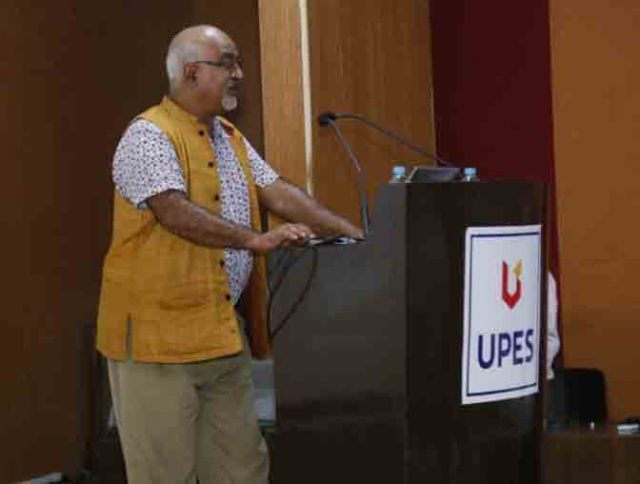 DEHRADUN, 1 Sep: Renowned academician and eminent economic expert Dr Ejaz Syed Ghani, at the invitation of the ‘Department of Economics & International Business, SOB’, delivered a ‘Distinguished Lecture’ on ‘India’s Spatial Development & Growth Challenges – with a focus on Energy & Transport Sector’ at the Auditorium of the School of Law in the Kandoli campus of the University of Petroleum and Energy Studies on 30 August. Besides being the current Economic Advisor to the World Bank, Dr Ghani has been a consultant to the International Labour Organization (ILO), United Nations Conference on Trade and Development (UNCTAD) and UNICEF. The session was chaired by Dr Githa S Heggde – Dean, School of Business, UPES. The lecture was a part of the Distinguished Lecturers Programme arranged by the university from time to time. Welcoming the esteemed guest, Dr Hiramoy Roy, Head – Department of Economics & International Business, SOB, shared that Dr Ghani had worked on the Africa, East Asia, South Asia, Corporate Strategy & Independent Evaluation Unit and had written on economic growth, green growth, macro policies, poverty, employment, entrepreneurship, urbanisation, gender, trade, decentralisation and agriculture. Dr Ghani stated, “In India, the secondary cities like Dehradun too are bound to become the centre of development similar to those of Europe, USA, China and other developed nations.” Expressing his optimism on India’s potential to grow manifold, he said that Prime Minister Narendra Modi had already emphasised the importance of wealth creation by paying attention to spatial development. He stressed that India had the potential to utilise new technology for futuristic spatial development. “The facts and figures indicate that the coming decade will witness maximum growth rate in the service sectors,” Dr Ghani stated. Dwelling at length on the drivers of Spatial Development & Urbanisation, he brought attention to the concept of ‘pull’ and ‘push’. He added that spatial development was expected to flourish via the modes of Green Energy such as Tidal Power Plants, Solar Panels, Hydro-Electric Power Plants, Windmills, etc. Commenting on the vision of the Government and Policy Makers, the veteran economist put weight on the need to study the constraints that are restricting the dream from becoming reality. “Factors such as huge congestion cost, lack of adequate investment in infrastructure and gender inequality prevalent in these secondary cities are reducing the pace of better growth and development of the country. However, if these grey areas are dealt with diligently, it will lead to unexpected positive results. It is predicted that the slow growing secondary cities will gain more traction than the mega cities,” Dr Ghani added. Sharing his experiences abroad, he highlighted the role of ‘Public Private Partnerships’ as reservoirs of economic funding and activity and stated that following the PPP model could lessen the burden on the Annual Budget. Predicting India’s double digit growth and creation of ten million jobs facilitated by spatial development, he stressed upon tapping into the Capital Market. “The Finance & Banking sector is also a way to procure the necessary funds. The focus should also be to adopt an approach of inclusive growth and development. Though spatial development in India is at a nascent stage today, but with strong efforts and focus in the prominent areas it will lead the country in the right direction,” he added. Dr Ghani also answered the questions raised by the students and faculty members. Dr Vijay Singh – Dean, School of Law, Dr TarunDhingra – Assistant Dean, Research, were present at the session attended by the students and members of the School of Business.