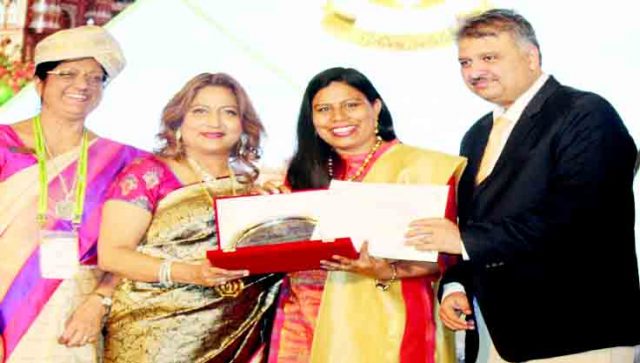 By OUR STAFF REPORTER
DEHRADUN, 14 Jan: Dr Sujata Sanjay was felicitated at the 62nd All India Congress of Obstetrics & Gynaecology – AICOG 2019, Bangalore, with the FOGSI Women’s Empowerment Award. She has been awarded for her ‘tireless efforts in social work to spread the message regarding health awareness, prevention and reduction of maternal mortality, and to promote the Government of India initiative of Beti Bachao, Beti Padhao in various schools and colleges.
Dr Sujata Sanjay, Obstetrician & Gynaecologist at Sanjay Maternity Centre, has conducted 225 free medical camps in 7 years which have helped around 6500 patients receive consultations. This was also recognised by the India Book of Records in 2017. Dr Sujata Sanjay had started these camps in 2010 in order to do her bit to serve the women of Uttarakhand, where health services are not freely available and to improve the reach to the nearby areas where women often overlook their health while serving and nurturing their families.
Dr Sujata Sanjay has broadcast over 117 radio talks on health issues, which has also been recognised by the India Book of Records 2017. Dr Sujata Sanjay is the only Obstetrician and Gynaecologist in Uttarakhand who has successfully delivered a child in a Post-Renal Transplant patient.
Dr Sujata Sanjay is also a recipient of #100 Women Achievers of India selected by Union Ministry of Women and Child Development. For this, she was felicitated by the then President of India, Pranab Mukherjee.
She has also published the first ever health book for the visually impaired in Braille Hindi, “Mahila Darpan”. She is distributing the book to libraries of Blind School across India. It was recently released by the Uttarakhand Governor.

Garhwal Post has established itself as a credible, balanced and forward looking newspaper in India. Based in Uttarakhand, the daily is read by the aware, socially and culturally responsible, high-income elite of society.
Contact us: info@garhwalpost.in
https://garhwalpost.in/love-island-usa-casting/ singles bendigo list of thai dating sites