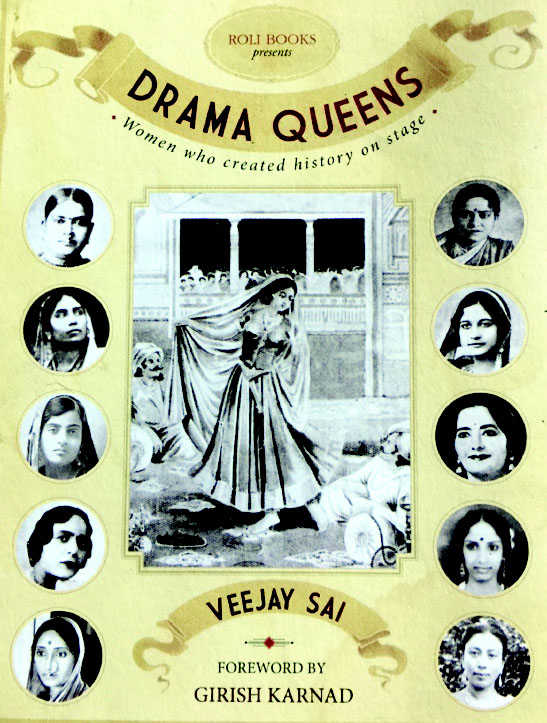 ‘Another step by step will cover the living imprint of your feet
/ But you yourself must not distinguish between your victory or your defeat.’ Boris Pasternak could well have written these lines for the ten forgotten women of early Indian drama. And Veejay Sai’s Drama Queens: Women who Created History on stage pays stellar tribute to them.
From 1850 to 1950 in India, women like Munni Bai, Mukhtar Begum, Jahanara Kajjan and Moti Bai were among the leading ladies of theatre who created history. They were stars in their own right, leading lives with a stunning passion in pursuit of their chosen avocation.
Sitting squarely at the cross roads of history and heritage, the book traces the lives of ten women who broke through the barrier prohibiting women from acting on public stage with the admonition: ‘Women from good families do not appear on stage!’
The awesome research sweeps through history, moving like a wide-angle lens that probes all and leaves out little. On this roller-coaster ride you find yourself astride the long forgotten lanes of regional drama, where in Chennai you meet Rukmanidevi Arundale, or Thanjavu Balasaraswati and Kumbekonam Balamani who once stormed the Tamil stage, to sing songs unborn.
Then there’s Tara Sundari Devi’s sterling contribution to the Bengali stage, where Michael Madhusudan Dutt wrote: ‘you cannot dress clean-shaven men as women. Start your own theatre with women, I’ll write plays for you; but it just won’t do without women.’ His Sarmista opened on 16 August 1873.
On the Parsi stage, it was left to Dadi Patel to set a trend that was soon after followed by Khatau who introduced the Irish Mary Fenton (whom he later ended up marrying and later accounts refer to her as Maher Bibi or Meher Bai). Riding high on the surf in her wake came unknowns like Miss Bijli, Miss Putli and Miss Kamli. In 1916, Khatau took his troupe to Lahore to reenact plays based on great epics, the Mahabharat and Ramayana. Trouble came knocking in the shape of a miffed editor, who being denied a free ticket, penned a nasty piece to spread rumours that a lowly nautch women, Gauhar Bano was being presented as a high Hindu woman. Result? Predictably, vandals ransacked the Drama Company, destroying valuable stage props. A much-distressed Khatau, could not deal with it and died of heart failure.
But incidents like these could not stop the march of women on to the stage. In the mid 1920s, Munni Bai was the highest paid artist in the fledgling industry, cutting her own records and by 1929, the adulation she commanded would have been the envy of any of our superstars: waiting a full fifteen minutes for the applause to die down as soon as she stepped on to the stage. Encore followed encore with the audience craving more.
Sadly, fame is a deceiving elf. Here today, gone tomorrow. And when the end came for the superstar, songstress and actress of the Parsi stage, she was selling off her medals to take care of her medical bills. Unsung, she lies buried in the corner of a graveyard.
The book is a fascinating account of the forgotten lives of women on stage through the choppy waters of British Raj.