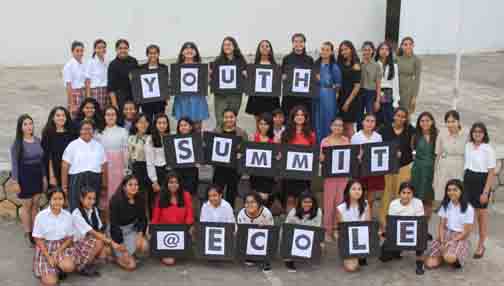 Dehradun, 4 Aug: Around 200 students from various schools and universities of Dehradun attended the “Dehradun Youth Summit, 2019” hosted by Ecole Globale International Girls’ School on 3-4 August. The Summit aimed at engaging the youth to bring about positive change in society, as an inclusive forum for youth from different socio-economic backgrounds, academic standards and gender identities. During the two day summit, there were discussions on socio-economic issues such as crimes against women, political issue of Kashmir, futuristic security concerns of the country and the role of youth in democracy.
Tarunjyot Juneja, Director, Ecole Globale International Girls’ School, said that the summit provided youth with a much sought after space to develop their own ideas and step-down action plans to bring about positive impact in their communities. In doing so, it created a platform for young people to discuss and share their ideas about nagging social issues and roles youth could play to address these problems.
The students were awarded with Best Photographer, Delegate, Cartoonist, and Best Reporter awards by Chief Guest Premchandra Aggarwal, Speaker, Vidhan Sabha, accompanied by Gauri Shankar, Motivational Speaker, and other dignitaries from various prestigious organisations. The festivities ended with a vote of thanks on behalf of the entire Ecole Globale community.