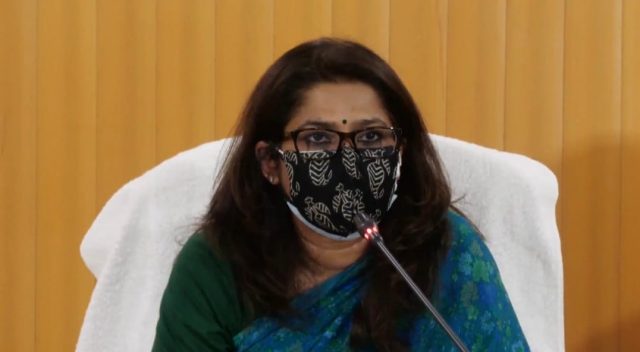 Dehradun, 5 May: Briefing the media at the Secretariat here, today, Additional Chief Secretary Manisha Panwar said that nodal officers had been deployed to ensure better management of the Covid pandemic in the state. She also claimed that efforts were underway by the government to procure medical equipment through CSR funds from various corporate houses besides the government’s own efforts in order to quickly boost the medical infrastructure in the state. Cooperation was being sought from various social organisations and companies towards this objective. Manisha Panwar, who heads the State IAS Association currently, also disclosed that these IAS officers had decided to donate a day’s salary every month for 3 months to the CM’s Relief Fund to help in the fight against the Covid pandemic.
Secretary, Health, Amit Negi added that the state government was constantly engaged in arranging oxygen beds, ICUs in the state for the needy. In the next few days, 1400 additional oxygen beds would be ready with the help of DRDO, for which the state government had released an amount of Rs 40 crores. According to Negi, till now, sample tests of 39 lakh people had been collected in the state.
Briefing the media on Covid vaccination, Negi said that the state government had received three lakh vaccines for vaccination of people above 45 years of age. Apart from this, Rs 100 crore had also been released from the Chief Minister’s Relief Fund for procurement of vaccines and vaccination of people between the ages of 18 and 45 years. A portal had been launched for arrangement of plasma donation, which had started getting a good response. He also claimed that more than two thousand people were getting free treatment from home every day through the e-Sanjeevani portal.
Negi said that the private hospitals in the state had been asked to use Remdesivir injections only as per SOP, but clarified that the state had adequate availability of these injections. He further said that major hospitals ought to report their oxygen demand to the administration 24 hours in advance so that it could be arranged and supplied on time. Along with this, instructions had been given to the District Magistrates to audit the oxygen being used in the hospitals.
He emphasised that cooperation of the general public was very important to prevent spread of Covid infection. People ought to leave their houses only when most necessary and strictly adhere to Covid guidelines. Officers had been entrusted with the responsibility of providing human resources for health facilities in the state. Arrangements for additional personnel for Covid related duties were being made in the state through outsourcing and through agencies like PRD, UPNL, etc. As many as 375 new doctors had also been appointed, in addition to 185 MNHP being deployed.
Secretary Dr Pankaj Kumar Pandey told media that Tocilizumab, a special medicine, ought to be used in Covid treatment only under very special circumstances. The state government had currently received 125 doses of this drug from the Central Government of which 25 doses had so far reached the state. To grant permission for use of this medicine, the Medical Department of Doon Medical College, for Garhwal Region, and Sushila Tiwari Medical College, for Kumaon Region, had been nominated.
Regarding black-marketing of Covid related drugs and oxygen in the state, IG Amit Sinha stated that continuous action was being taken by the government in Nainital, Udham Singh Nagar, Dehradun and Haridwar. In the last two days, four people had been arrested for black marketing. Along with this, oxygen cylinders had also been recovered by the police from the illegal possession of certain persons. He added that the public could inform the Police regarding black marketing of oxygen or any other drug on Helpline Number 112 and the Police would take appropriate action.