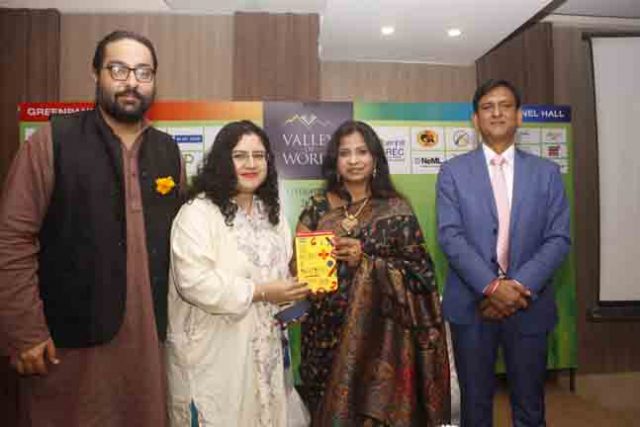 DEHRADUN, 16 Nov: Did the Vedic rituals and stringent rules pave the way for developments in mathematics in India? Was the Pythagoras system developed by Pythagoras? Why do we have very less knowledge about our ancestors’ contributions to the world of science and technology? The session “Tales from the History of Mathematics” by Archana Sarat and Sanjay Jasola was interesting, interlaced with anecdotes and facts about our misconceptions. Sarat talked about the problems she faced while conducting her research on India’s contribution to science and technology and also about the personal feelings and emotions linked with her work. The reason we might have less or no information on our ancient scientists might be the Indian tradition of being humble and the obsession with traditions, but how did India achieve so many feats in the field of mathematics? The Vedic rules and regulations were the motivating factor. Every ritual had specific rules on the setting up of the altar including the measurements, the number of bricks that can be used and the shape in which that should be done. If, for a particular ritual, the altar should be 4 by 3, should have 100 bricks and should be in the shape of a circle, it is necessary for them to know how to make a proper circle and how to fit in 100 bricks as per the said measurements. This could be the motivating factor that led to tremendous developments in mathematics in the Indian sub- continent. The Indus valley civilization used a measurement corresponding to the present day 1.3 inches, called the Indus inch. It can be seen that everything that needed measurements in their daily life, including the bricks, the cloths and so on, followed multiples of the Indus inch. It is a common notion that Indians discovered zero. It might not entirely true to say that because the Mayans, Babylonians and the Chinese civilizations had zero in their concepts, but their knowledge of zero might not have been conclusive. They might have kept zero as a bench mark or to its face value. Indians were the first civilizations who discovered the true potential of zero and could use it in their calculations. The need of zero is very initial for the progress of science and mathematics. For instance, the romans had different symbols for different multiples of 10. Like a X for 10, a C for 100 and a M for 1000. This was the major reason for the lack of development in mathematics that happened in the roman civilization. Also the Pythagoras theorem and the Fibonacci series, whose discovery is credited to the west, have been explained in our ancient scientific texts. Archana Sarat talks about how she had difficulties in finding primary sources and information on ancient mathematicians and how the Bakshali manuscript was the major source that helped her. Written in the bark of a tree, the Bakshali document was found by a farmer in present-day Pakistan during the British Raj. The Britishers, realising its historical potential, sent it to Oxford University and it is now preserved there. Sarat tells about she broke down seeing the manuscript in reality on a visit to London. The manuscript had become so personal to her that she could not control her emotions upon seeing it with her own eyes. Mathematics, for most of us, would have been a dreaded subject and most of us would have been fed up with it. To know about people who studied mathematics just because of their love for it and sacrificed their life for numbers was entirely enlightening for the audience who attended the session.