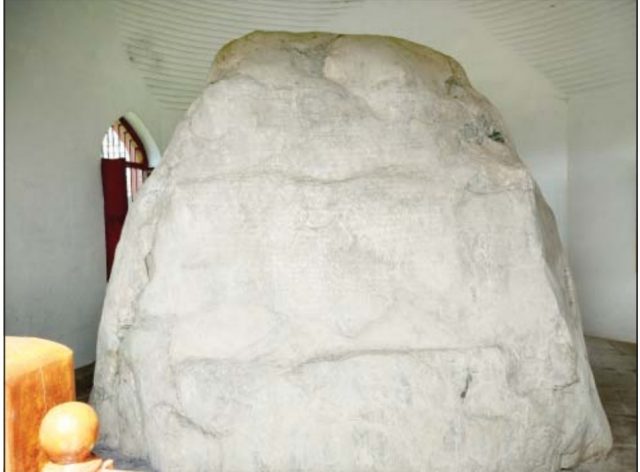 The Doon Valley down the Ages 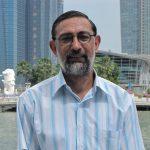 By SUDHIR K ARORA
After the Mahabharat era, the next mention of the Doon (in olden literature) is during the Mauryan period. At that time, again, it must have been a well-populated and flourishing region. According to Panini, the capital town of the Kulind province in those days was Kalkut (Kalsi of today). Emperor Ashok (274-232 B.C.) thought it fit to install one of his “rock edicts” at Kalsi. It was discovered by an
Englishman, Mr Forest, in the year 1860 AD. The letters of the inscription were hardly visible, the whole surface of the stone being encrusted with the moss of ages. On removing the black film, the surface became nearly as white as marble.

The quartz boulder, which is about ten feet high, ten feet long, and eight feet broad at the base, stands on a ledge overhanging the right bank of the river
Yamuna. The figure of an elephant is inscribed on the rock with words “Gaj (a) tame” i.e., “Gajottama” meaning the most excellent elephant.

Ashok had an attachment to various Buddhist symbols. The symbol of the “White Elephant” recalls the descent of the Buddha, in that form, into the womb of his mother. Thus, there is an attempt on the part of Ashok to dedicate his edicts, as it were, to the Buddha. The Ashokan pillars have the elephant, the bull, the horse, and the lion as their capitals. These were probably chosen by him as symbols of
different stages in the life of Buddha. The elephant typifies the Conception, the bull (as presiding over) the Nativity, the horse the great departure, Renunciation, and the lion as the Lion (King) among the Sakyas, ‘Sakyasimha’ as the Buddha was known.

The inscription on the rock is in the ‘Brahmi’ script in the eastern dialect of Magadhi, which was the official language of the Court and served as the lingua
franca for Ashok’s empire. In the text of the inscription are mentioned, inter alia the names of Ashok’s five contemporary kings of the western world, namely, Antiochus, Ptolemy, Antigonus, Magas, and Alexander. According to European history, they can be identified with Antiochus Theos of Syria (263-246 B.C.), Ptolemy Philadelphus
of Egypt (285-246 B.C.), Antigonus Gonatus of Macedonia (276-243 B.C.), Magas of Syrene (258 B.C.), and Alexander of Epirus (274-254 B.C.)

The historian’s (Indologists) translation of the edict is as follows – “Thus saith His Sacred and Gracious Majesty the King: “People perform various
ceremonies. In troubles, marriages of sons and daughters, birth of children, departure from home –
on these and other occasions, people perform many different ceremonies. But, in such cases, mothers and wives perform numerous and diverse, petty and
worthless ceremonies.

“Now ceremonies should certainly be performed. But these bear little fruit. That, however, is productive of great fruit which is connected with ‘Dharma’. Herein
are these: “Proper treatment of slaves and employees, reverence to teachers, restraint of violence towards living creatures and liberality to Brahman and Sramana ascetics. These and such
others are called ‘Dharma-mangalas’.

(Kautilya has elaborated on these precepts in the various treatises and laws expounded by him).

“Therefore should it be said by a father, or a son, or a brother, or a master, or a friend, a companion and even a neighbour: “This is commendable; this is a ceremony to be performed until the purpose thereof is fulfilled; this shall I perform.” For those ceremonies
that are other than these – they are all of doubtful effect. It may achieve that purpose or may not. And it is only for this world. But his ceremonial of ‘Dharma’ is not of time. Even if one does not achieve that object in this world, in the world beyond is produced
endless merit. But if one achieves that purpose in this world, the gain of both results from it – that object in this world, and endless merit is produced in the other world by this ‘Dharma-mangala’.

“His Sacred and Gracious Majesty the King does not regard glory or fame as bringing much gain except that whatever glory or fame he desires, it would be only for this that the people might in the present time and in the future should practice obedience to
Dharma and conform to the observances of Dharma. For this purpose does his Sacred and Gracious Majesty the King wish for glory or fame. And what little he exerts himself, that is all for the hereafter, and in order that all may be free from confinement (or bondage). And this is bondage, namely, sin. This is, indeed, difficult of achievement by the lowly or high in rank except by strenuous preliminary effort, renouncing all. But among these two, it is more
difficult of achievement by the person of superior rank.”

(The above text is more or less the gist of Buddha’s
Dhammapada.)

In 1912, the Government of Uttar Pradesh (United Provinces of Agra and Oudh as it was then called) built a domed structure enclosing the rock to protect it from vandalism. It is now a protected monument.

[Excerpt from “Doon Valley Down the Ages” by late
Prem Hari Har Lal – a most comprehensive history of the Doon Valley from antiquity onwards. The revised edition of 2019 is distributed by Book World, Dehradun. Contributed by the publisher].