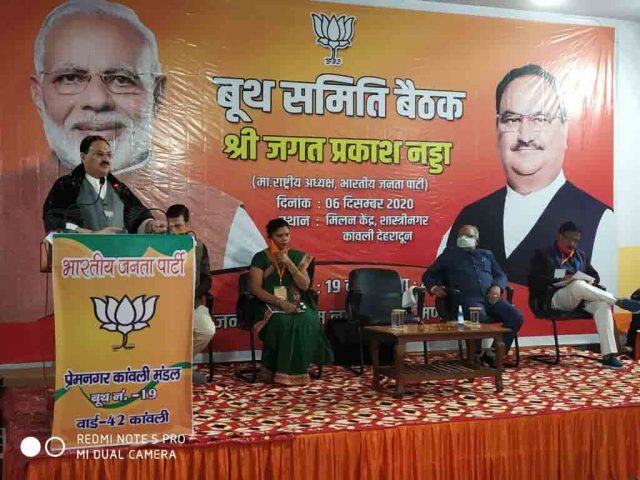 By Our Staff Reporter
Dehradun, 6 Dec: BJP National President JP Nadda said here, today, that the party’s various modules played a significant role. If anybody felt they functioned in uninspiring manner, they could give life to the activities through their efforts.
He was addressing a review meeting of office-bearers from the various divisions at the Bijapur Guest House. He recalled that concept of the various departments was initiated by former Party President Amit Shah, which had become a reality today.
He pointed out that the departments had, both, political and social dimensions, which offered the opportunity to work in various areas, taking the party forward and acquainting people with its ideology.
The programme began with lighting of the ceremonial lamp by the Party President. Nadda obtained information about the performance of as many as 30 departments. He urged those present to work with utmost enthusiasm. He said the organisation required uniformity to function effectively. The Prime Minister had conceptualised the modern party office where activists would feel motivated to work. He advised them to prepare blueprints on their future activities.
Party officials, in turn, offered their suggestions to the Party President.
Present on the dais on the occasion were State President Bansidhar Bhagat, CM Trivendra Singh Rawat, State In-charge Dushyant Kumary Gautam, Shiv Prakash and Rekha Verma.