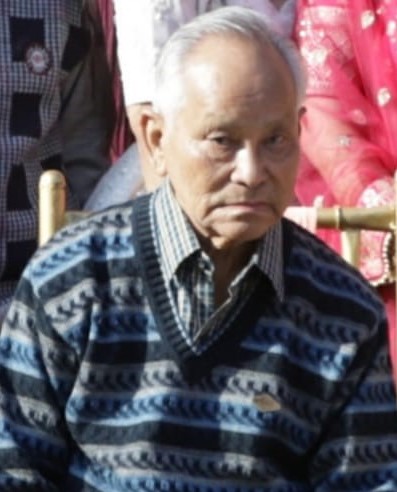 Dehradun, 18 Apr: Eminent entomologist and writer of FRI passed away on 16 April at his residence, 133 Kalidas Road, after a prolonged illness. He was 91. He had written many books such as ‘Termites of Sabah (East Malaysia)’, which are available in the FRI Library. These books are also prescribed in Malaysian universities.
Various closely associated persons and his relatives have sent their heartfelt condolences to the bereaved family and prayed to the Almighty to keep his soul in peace.
For much of his career, he was with the FRI as Director and Head of the Entomology Department. He carried out scientific research on many subjects and wrote research papers that were of great help to the FRI. Government of India had deputed him to Malaysia twice as an advisor to the Malaysian Government in entomology research.
He died due to a prolonged illness. His last rites were carried out at Tapkeshwar cremation ground, today, where his youngest son, Mohneesh, lit the pyre. Also present were Col Anup Thapa, Lt Col BM Thapa, JS Thapa, Ram Singh Thapa, Neeraj Singh Thapa, Deependra Chand Thakur, Rahul Prasad Sati and many others.
He is survived by his wife Bimala, sons Dr Rajneesh and Mohneesh, married to Madhu and Smita, respectively, daughter Vineeta, who is married to Col Anup Thapa, and grandchildren Keshav, Neeti, Shloka, Avisha and Dr Akshara, married to Kuber Chand.
Lt Col BM Thapa and his wife Meera Thapa have extended their deepest condolences to the bereaved family. The late Ram Singh Thapa was Meera Thapa’s maternal uncle. The prayer meeting and Tehrvi is scheduled for 27 April.